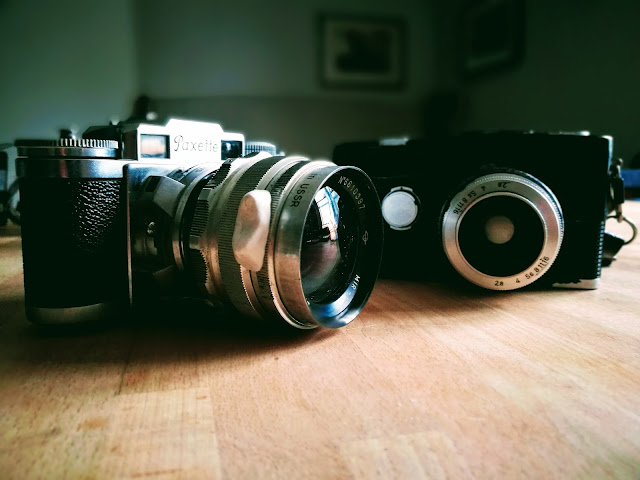 That which you see before your eyes are hybrids. They are the concoction of a twisted mind. (Mine.)
The idea sprung to mind while researching the Paxette camera. I learned that it had exchangeable lenses with M39 screw mount - not compatible with Leica thread mount (LTM) system M39 lenses, though. The reason they weren't compatible systems? FFD difference. I.e. Flange Focal Distances differed.

The Paxette body project
But! I have another lens with M39 mount that's not compatible with LTM cameras, I pondered. The Mir-1 which came with the early Zenit SLRs. I had to use an adapter ring to make it fit my M42 screw mount cameras. What if...
So I fit it to the Paxette body. The exact same screw threads. Then I read up on FFD. The difference between the Paxette system and the M42 SLR system is 1.46mm apparently. That explains why I hadn't come across anyone online who claimed to use Paxette lenses on an SLR. It would be out of focus.
On the other hand... Why don't I just add 1.46mm distance and mount the Mir to the Paxette? 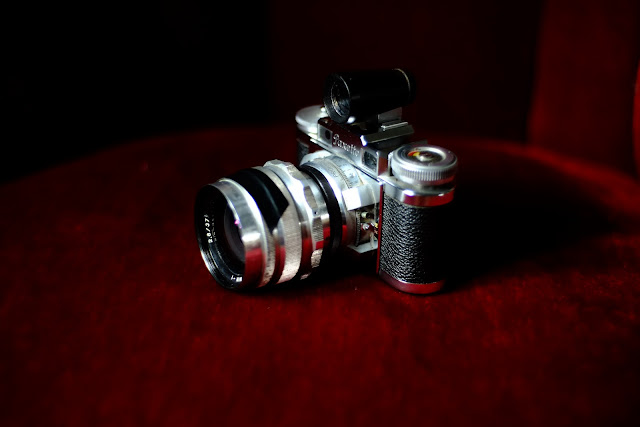 So, that's what I did. I used some knurled metal wire (for a bit of spring-y resistance). Now, the Mir-1 does protrude a bit into the camera body so that it touches the shutter housing when I want to focus to infinity. Ah, well. I can use zone focusing for larger depth of field which overcomes that hurdle.
For this little project I used the 37 mm Mir-1 lens so there is a 35 mm external viewfinder attached to the flash mount/cold shoe. I need it because the viewfinder in the Paxette shows a 45 mm standard view. (FYI there is also the early version 58 mm Helios-44 lens with LTM which can be fitted to the Paxette in the same way as well as a 135 mm lens for the Zenit that I know of.)
The Paxette has a rangefinder but it's not coupled. So I'm focusing the Mir in the way I would focus any original system lens for it. You find focus matching the patches in the viewfinder with a small wheel which sits on the top back of the camera in the same way you'd use an external rangefinder. The reading it produces is then transferred to the lens. 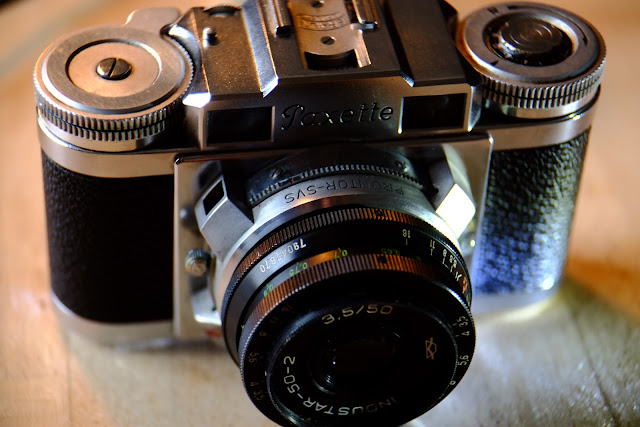 Update: Since finishing the first roll of film, I've removed the LTM mount from the camera. It was only fastened with three screws. I then glued a thin M42 to M42 adapter/ring in its place. I can now mount any M42 mount lens to the camera. Except the ones that protrude too much into the shutter housing.

The Paxette lens (Steinheil Cassarit 45mm 1:2,8) project
The Paxette is quite an amazing camera being very (I would say VERY) compact and still has a range of lenses to choose from. It's smaller than a Leica - rather equal in size to a Voigtländer Vito B. For me that's a Wow-factor. It must have been an expensive camera to invest in back in the day (1950s).
This Cassarit lens is very compact - comparably though even smaller than my Steinheil Cassar lens which is for M42 system cameras. Here you see that lens mounted on an adapter for my Pen F for comparison. 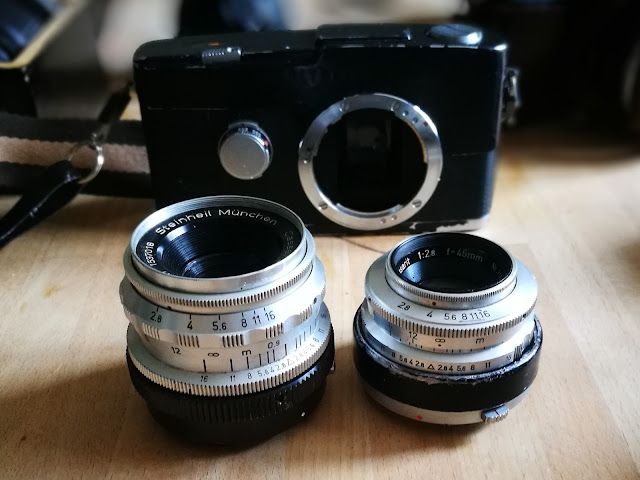 Having recently /once again/ invested in a useless microscope adapter thingy which originally is to be used with medical version Olympus Pen F cameras (I've already elaborated on this subject here) I was now in posession of an actual Pen F adapter - which is a rare and expensive thing. Well, it didn't fit any lens once I'd loosened the screws that fit it to the microscope thing. But that's what you use Sugru (clay glue) for! Well - with an added surplus ring from a defunct tele-lens of some kind that's rattling about in your drawer.
You also need to have an idea about which FFD the Pen F has. Actually, you don't since it's an SLR so you just peek through the finder to get an idea of at what distance to fixate the lens to your assortment of junk which will consistute the mount. I then used three packets of Sugru. 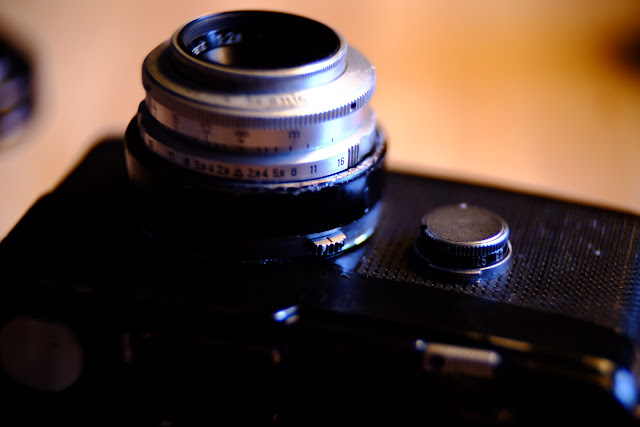 Here are some photos from the experiment. First off is the Paxette/Helios combo: 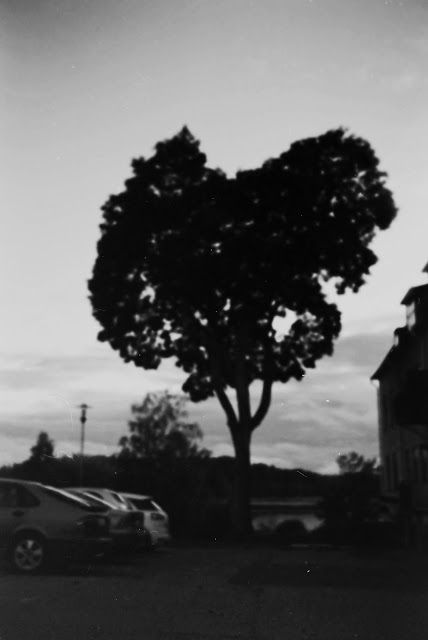 As you can see it is not in focus at infinity. 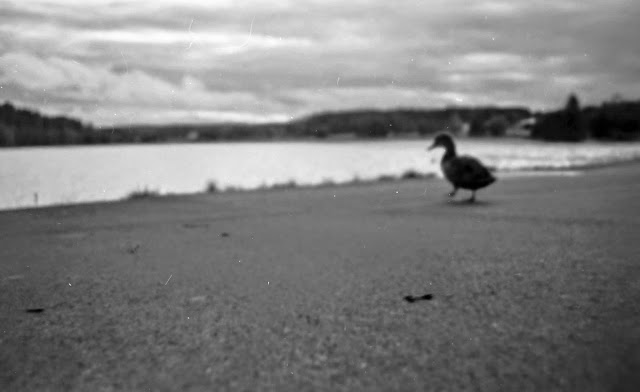 Here's a very obvious example of what happens if you don't find the correct FFD. The lens is obviously mounted too far from the body, as is apparent in the fact that I focused for the duck but instead got focus closer to me. 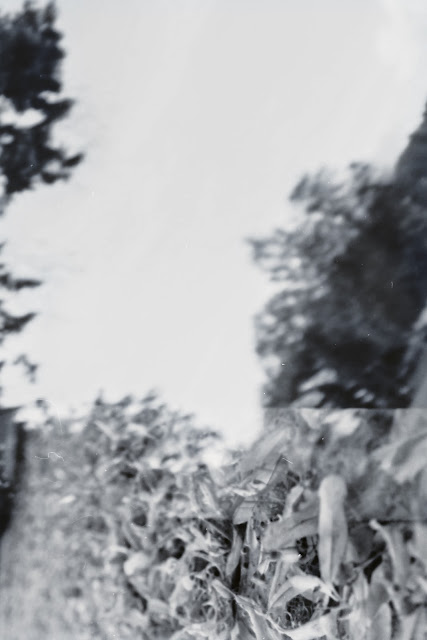 This is the only photo with something akin to sharp focus. But that's because it's a sort of macro effect - which is what you get  if you mount the lens further from the preferred FFD than intended.

More problematic ones - this time from the Paxette/Industar 50-2 combination: 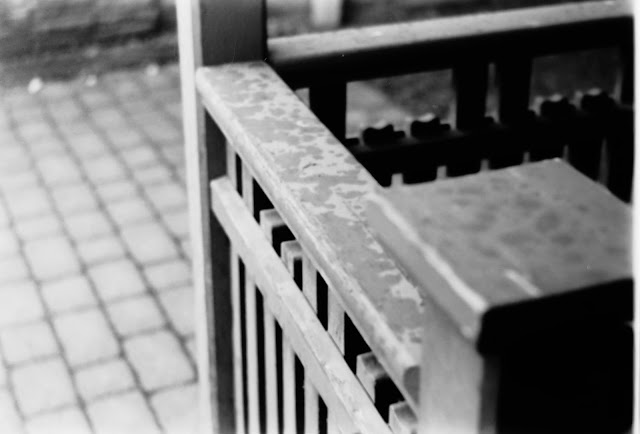 Here is focus at least. I got the new mount a bit closer to the correct FFD - but not spot on. 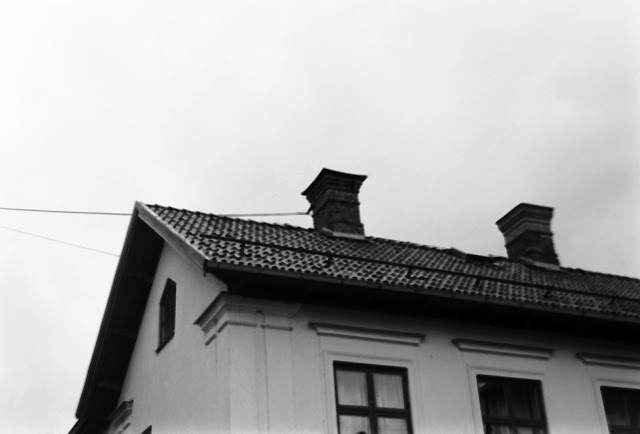 Focusing close to infinity at a rather wide aperture - I think 5,6. 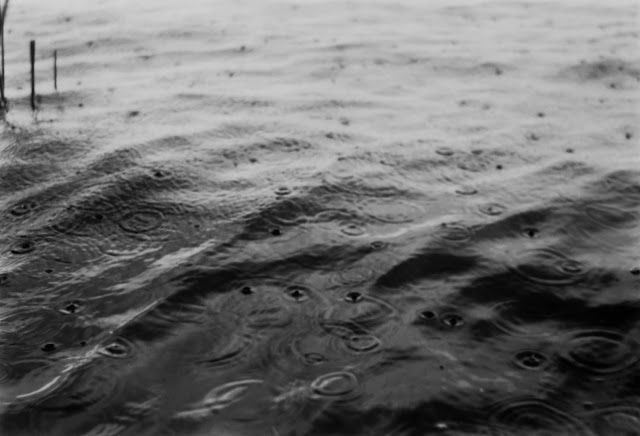 Here's something resembling a good exposure. But the focus is at the bottom of the picture - not where I wanted it. 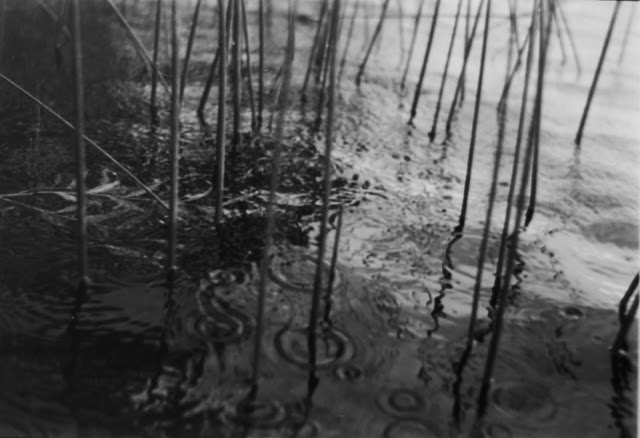 Somehow I got this right! Wow. I very much enjoyed these moments watching the rain and trying to catch some impressions of it. 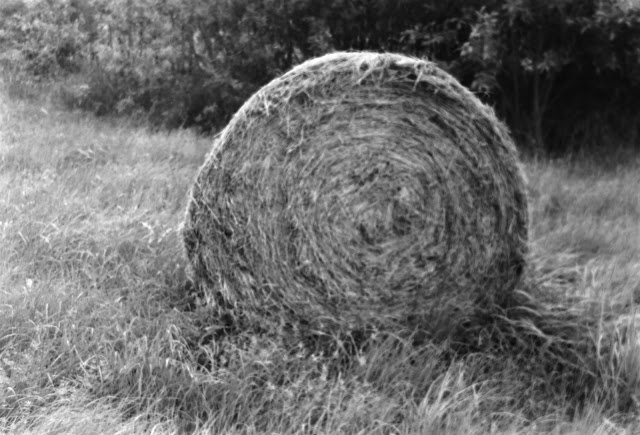 Here's an obvious FFD induced focus miss - f4 I believe and you can see the sharpness of focus in the grass in the foreground. 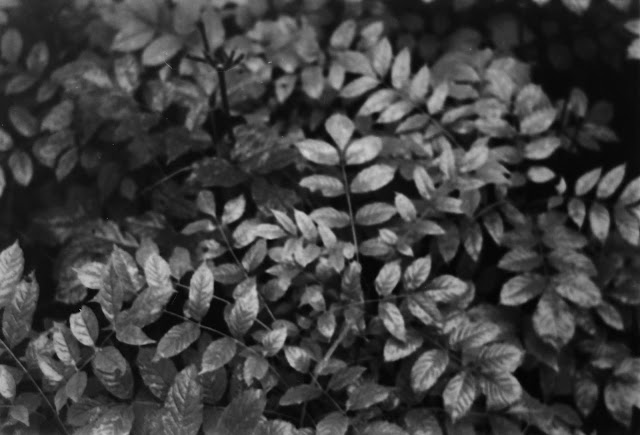 I so wish that this one'd been in focus... 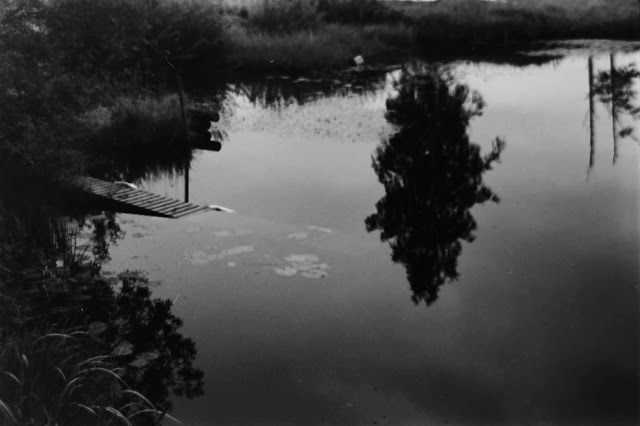 In focus but shaky camera. 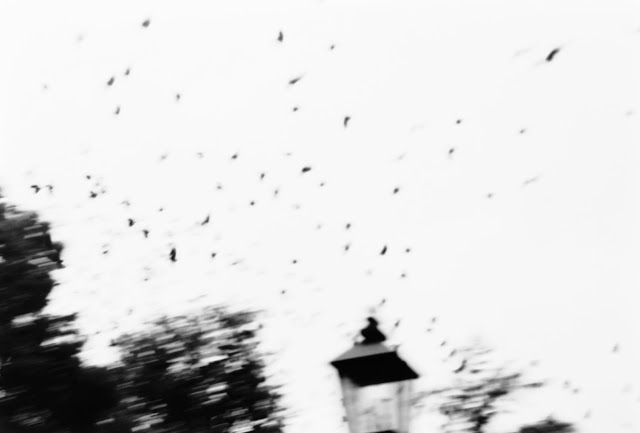 In this photograph focus is not important. So - the second best photograph on the roll.

Next comes simple contact sheets of photographs made with the Pen/Cassarit kit. The important bit is: FOCUS! Well you can't fail since the Pen is an SLR. 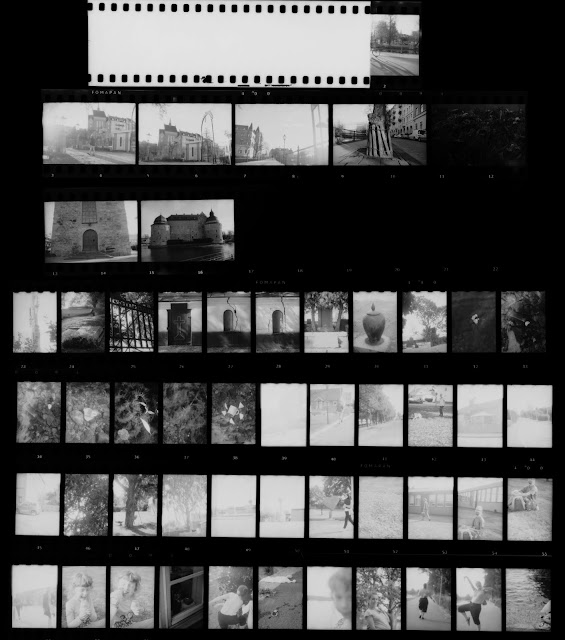 As a sidenote I can assess that the Pen F is a great size camera for a sixyearold's hands. My daughter took some of these photos with an ease that surprised me.

Conclusion: What did I learn?
1  Good scanning equipment!! My computer stopped working a while ago so I couldn't scan the negatives. I've tried the classic repro-photography using my X-Pro1, bellows and a classic frosted negative holder, but hey - a flatbed scanner with film holders beats that set-up by miles.
2  I need to adjust the FFD of the Paxette mount still some more. I'll remove it and sand it down a bit. I can then mount it so that the lenses sit at exactly +1.46 mm.
3  This whole process of trying these combinations of body + lens also made me think even harder about exposure. The thought processes of trying to understand the workings of the camera and the readings of the light meter and combining them with your knowledge of exposure and composition is what makes the photographing such an intense or immersive experience. In the past months I've exposed many rolls, and have burrowed more deeply into this craft. What happened when I exposed these rolls mentioned here was I started to dare doing stuff that I'd only done with my digital Fujis - that is exposing for the highlights in more situations. It is now a part of the catalog of exposure combinations I can make with b&w film as well. My eyes in the early autumn are better at seeing in black and white than they were before the summer.

Thank you for reading about my adventures in Frankencamera land. Check our my Instagram at #ourbooksmalmo and my Etsy shop getOurBooks where you can find no books but cameras aplenty!