It is only a camera. Yet, why am I smitten? And common sense tells us that the lens is what technically makes the picture what it is. The lens projects the image onto whatever surface is there. It does not matter what the vessel holding up that surface looks like. Lenses may well be objects of fetish. But camera bodies?
Let me start again.

Introduction
My Akarette II is one of the best cameras I've used. This text will be an attempt at explaining this bold statement. Additionally it will consist of a comparison between my experience of using the seemingly very similar cameras Akarette II and Voigtländer Vito B.

When writing this I have used the Vito B for something like four months. The main bulk of my experience comes from a 48 hour stint in Stockholm in August - where most of the Vito example pictures stem from.

The Akarette has been in my care for about four weeks. I just received the negatives from the first two rolls I've exposed with this camera from the lab. I've used it extensively, for instance trying to capture impressions of the fading summer and the autumnal (Scandinavian) light. After the Midsummer solstice the Swedish midday sun moves rapidly towards the horizon again, day by day, making the days shorter. Already in early September the dark part of the year is approaching, the light at dusk less warmly tinted (yet at times dense with a yellow tint). 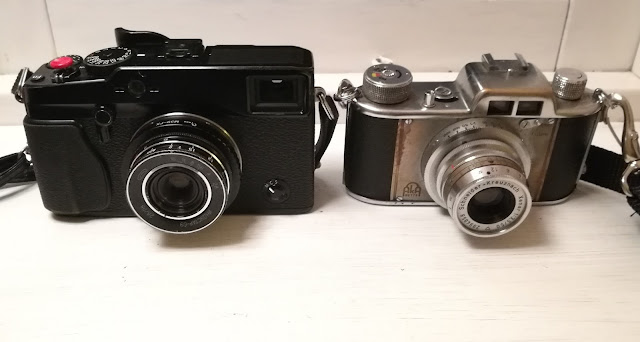 The rounded edges and heaviness of the Akarette makes it feel good in my hands, while the Vito has more "hard" edges and a brick-like density. The Vito is 100 grams heavier, even though it is the smaller camera of the two. The Akarette weighs more than my much larger digital X-Pro camera, which instinctively feels odd. Of course the older cameras are all metal and glass, being produced in the early and mid '50s, respectively. 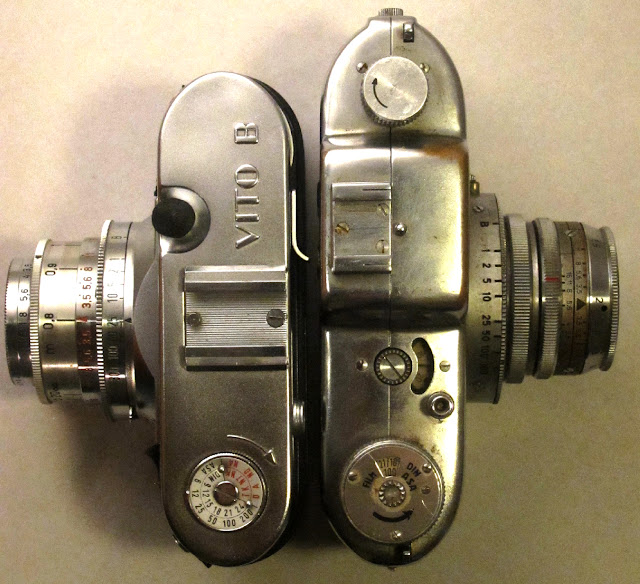 On previsualization
Much of analog photography is based on this. The process of deducing in advance how to expose and prepare the taking of a picture. Your knack for previsualization is the back-bone of your ability for taking analog pictures without automated aid. These two cameras will achieve nothing in the form of photographs unless you've done your homework. 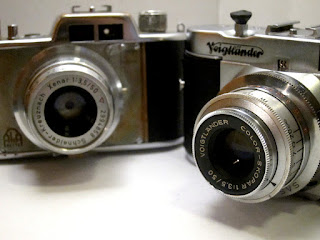 On 50 mm lenses
A 50 is a portrait lens, is what a lot of people say. When out of the studio, I'd say it's a 'compositions' lens. A wide angle - 35 mm, say - I would term a 'scene' lens - good for capturing a larger context. Making a picture with a compositions lens, on the other hand, is very much dependent on the photographer's ability to leave stuff out. Or to incorporate compositional elements like lines and shapes. This you can of course do with a wide angle lens - but it's more difficult since you have to physically get closer to the subject of your picture.


And blah blah blah. So much is written on this subject already. What I'm trying to get at here is that the two reviewed cameras are excellent compositions cameras, each sporting a 50 mm lens of decent quality.

I say decent, since in my pictures I haven't managed to get really sharp results. I still haven't scanned the pictures in high resolution, and I am very much finding my way in digital post-processing so I am not an expert. And I've used 400 ASA film which has been both pushed in processing and intentionally over-exposed which can add a lot of grain to pictures.

Notwithstanding using a compositions lens I tried to catch 'scenes' when in Stockholm with the Vito. Sweden's largest cities are not near as crowded as the metropolitan cities of the world, so trying to catch bustling crowd scenes other than narrow tourist-filled alleys is a hard come-by. Unfortunately my attempts at crowd photos were over (and over) exposed by the failing Vito (read below).


Focusing
These two are viewfinder cameras. Alas, focusing is done in a process of guesstimation when I take pictures. I always bring a workman's laser distance meter, but I've not to this day used it in photography. (Unwise, I know.) For focus I use crude estimation along with my dumbed down zone focusing skills (I never seem to remember the basics - or particulars). So, when the light is poorer I tend to use longer exposure to try to keep focal depth.

The Akarette focus ring is situated at the front of the lens. I believe that this fact is a huge part of my fondness for this camera.

As for the Vito the max throw is something like 300 degrees. The focus distance is much more detailed - especially in the below 2 meter range. So precise close focusing is quite possible. Closest focusing range is the not so impressive 0,8 meters. Perhaps the Akarette has a similar close focus range, but we don't know since it is not marked on the lens. But probably it is since one can turn the focusing past the 1 meter mark.


Exposure
It's a three step process:

Intuitively where all these controls are placed around the lens, they should be in order - from rear to front - i think. And they are on the Akarette! (And the later Vito BR - where R stands for Rangefinder!) The Vito on the other hand has the aperture ring in the front. Which means you have to hold fast the focus ring to be able to change focus. It's a bit annoying, and not at all unusual in lenses. I just feel the placement to be counter-intuitive.


They are not fast cameras. Fastest shutter speed on both are 1/300th of a second. Taking pictures in Stockholm in sunny August, with 400 ASA film means keeping it at 1/300th or 1/100th, while changing apertures from 11 to 5,6. (I always try to overexpose 1-2 steps.)
Stockholm was Vito circumstances. The Akarette conditions have been more varied - from bright sun with clear skies mid-afternoon, to actual night exposures at hospital windows (my Mom's in stroke rehabilitation), to "sunset with ferry". So, even with 400 ASA film I've been taking a whole bunch of exposures at 1/25th. (I would even have exposed at longer times had those not been kaputt on my camera. Actually they are on the Vito too.) That fees like the old days when I trusted my 25-year-old hands to be steady enough. I don't anymore.

Loading film
There's nothing strange about loading film into the Akarette. Well, apart from the fact that the whole back half of the body is hinged. It is a brilliant solution to the problem of light leaks. Here it's not very likely.

The Vito is almost equally eccentrically loaded. A small 'lip' is folded out and twisted whereafter a third of the bottom - which is hinged - falls out and in that movement releases the hinged "back door". Load film and reverse the motions and you're done.

When I received the first two rolls taken in Stockholm i got hiccups since there were many black blotches on the negatives. There were triple or more exposures made on the same area or in successive areas. On the first day of using the camera in the city I noted that the winder would return and an exposure could be made even though the winder arm hadn't been fully wound. But when seeing the negs I realized how many pictures were affected.
From testing and reflection I've come to deduce that if the film isn't quite tense when loaded the mistake will be repeated. At least this goes for my own Vito.

The pictures that did come through were rather satisfactory, though.

While on the subject of winding, the Akarette, as you can see, has a wheel winder much like the Fed 2, which I love to use. It's real easy to wind, while rewinding the film is a bit of a hassle, as it is on my Fed. Well, it's old, and inherently should be more 'work' intensive than a modern camera.

Conclusion
If I were to go out today with one of these two cameras my choice would be the Akarette. Here's why:

A It feels much lighter (even though it's not, really)
B It's more easily/intuitively handled
C The knowledge of more available lenses out there
D Since it is 'uglier' it feels more a part of history, of manufacturers finding their way. But that's me.

There are som 'buts' when it comes to user experience concerning these camera. When they are used in an appropriate situation, though, like 'street photography', they are a joy to use. And wear - the Vito like jewellery - the Akarette like an analog statement.


Please comment on this text. And visit my shop at Etsy for more camera related inspiration!