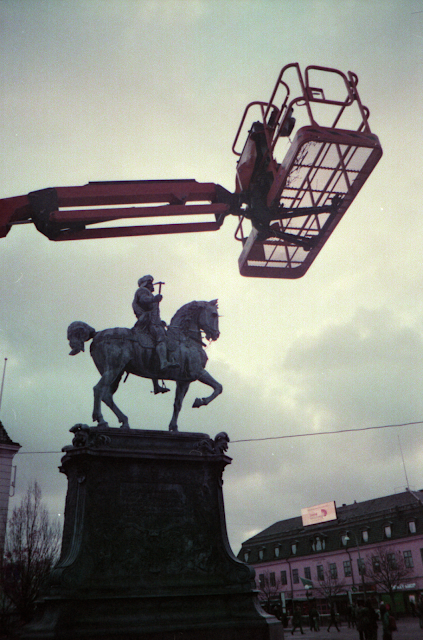 At long last, I will do some public pondering on wide angle photography. In the last year or so I've become rather content with using 50 mm plus lenses. Several of my regularly used cameras come with those or longer focal lengths. The compact fixed lens ones sport 45 or 50 mm lenses. The digital or half-frame ones I most prefer are equal to 60 or 75 mm, with the one odd exception of the (28 mm) 42 mm Industar 69.
My first example(s) are from a roll of purple tinted Lomography film but they are here primarily because they were exposed through a 30 mm lens.
Oh, let's first set the foundation for the discourse of "wide angle" lenses. For this post I will include lenses 38 mm and wider as wide angle. As a contrast to the "standard" focal length of 50 mm (what the eye sees). And I'll include the common focal lengths 45 and 42 mm lenses in the "standard" category.
Back to the 30 mm lens. It is quite a rare focal length, as far as I know. This one was made by Meyer-Optik Görlitz for Praktica cameras in the 1960s. I bought it with a defunct camera at Plastac Retro in Gothenburg. 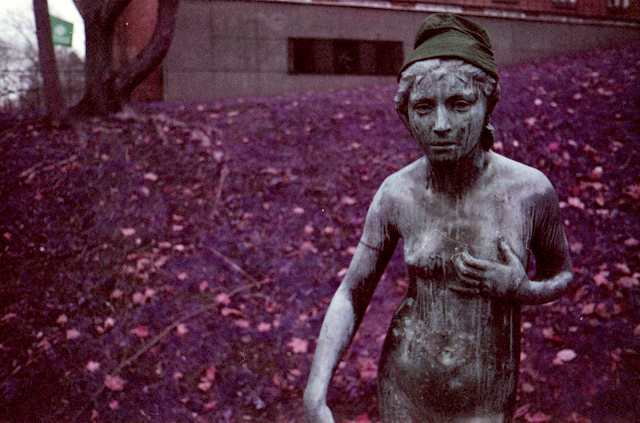 The way I use wide angle lenses is I use a lot of space to create interesting compositions. Like in the one above, there's a lot of room for the imagination to conjure up what will fill up the void to the left of the statue... And by the way, what's happened to her? 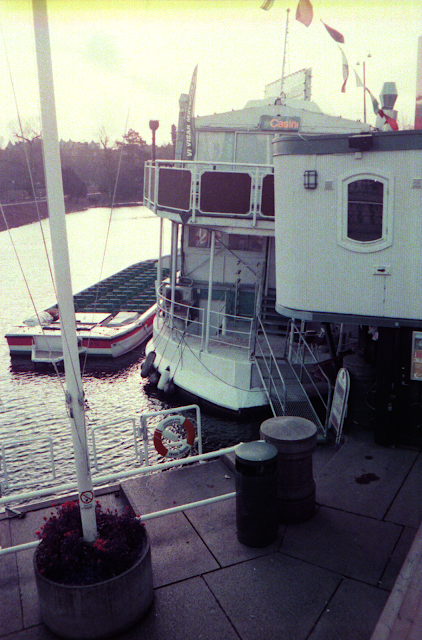 Another way to use the wide angle's inherent qualities is to include lots of elements/subjects to let the eye wander around and create a story or impression or just set the mind to work. The above picture as well as the one on top of the page are included in this category. 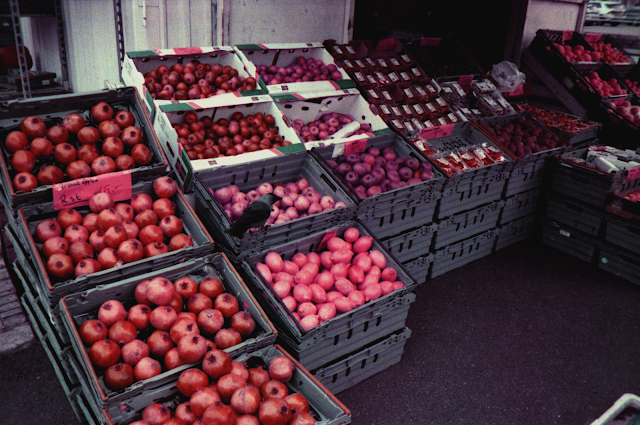 The picture above is one in the snap-shot category, which doesn't use the wide angle to tell a story but could have been taken with any focal length. 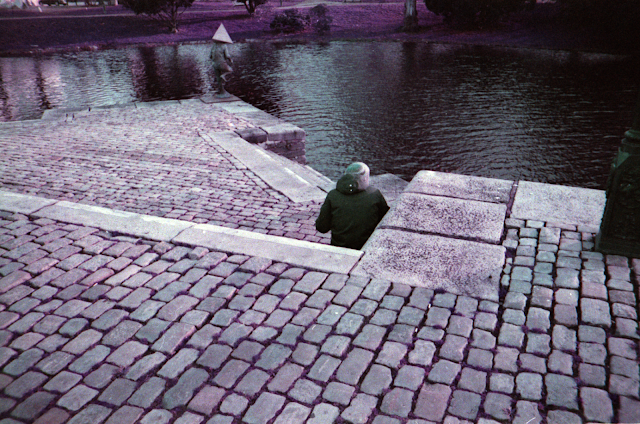 Above I use the space around the figures to add to the humour. The wide spaces and the compositional elements of squares and lines add to a sense of direction (or confusion), but the mind is confused of the purpose, so the humour is an essential element to "finish" the story. 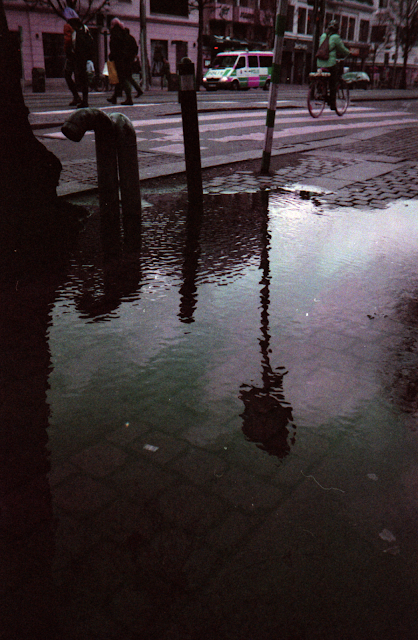 In the above picture I use the wide angle lens to include some context to the reflection in the puddle. Refining the composition by trying to define/focus on the pipes, signs and their reflections wasn't doable because of the cluttered background/context of the lively street. So - several elements are important to tell a story/drama: The street sign; the bent (u-boat) pipes; the paving stones visible through the water; the police car. 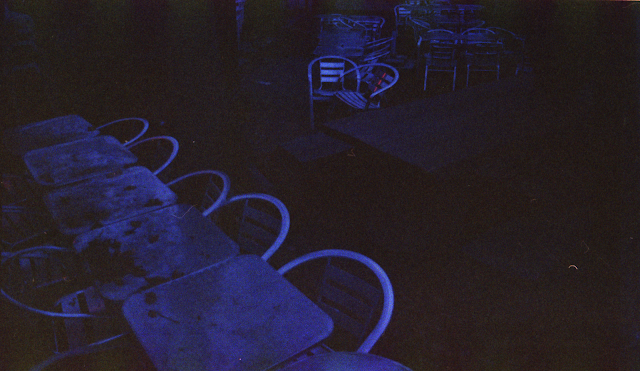 This photograph I took with my Soviet 37 mm Mir-1 lens. I am quite fond of confusing compositions, as you probably can tell from my example photos so far. I like the off-center, surprising, or cluttered compositions. (With no other comparison of quality, Henri Cartier-Bresson's photograph "Paris, Gare Saint-Lazare" comes to mind, as a favourite of mine.) 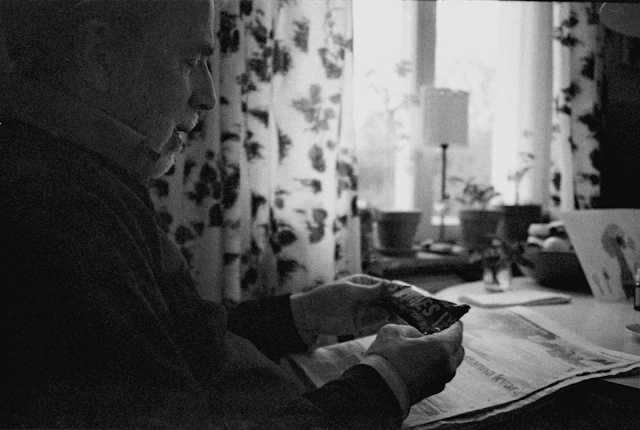 Here's an obvious example of what qualities using a wide-angle in composition brings. The central object is in focus, the context tells the story of "who", "where" and even "when". If the lens had been a 50 mm the picture had been less intimate, I'd had to leave the "who" out of the picture, making it meaningless even. This photograph was made with the Olympus XA:s 35 mm lens. 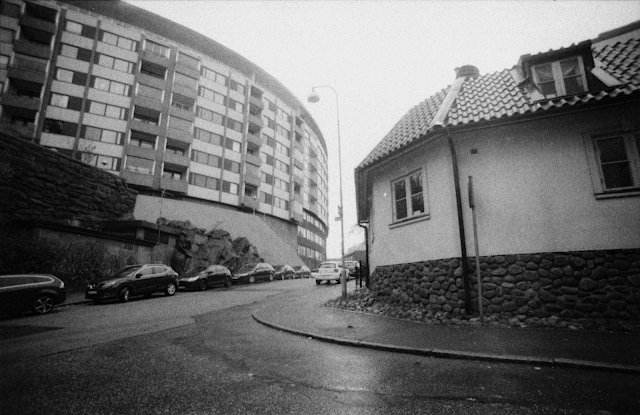 Here's one of my early pictures taken with a 20 mm Nikon SLR lens mounted on my Canon P with an adapter. Speak of a wide-angle feel! The composition is made with the very wide lense's tendency to distort lines in mind, exaggerating this through the use of the rounded shapes in the houses and the pavement. 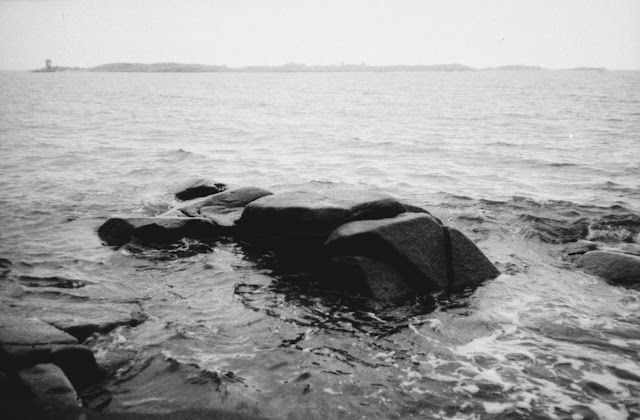 This picture I made just after my mother's funeral. I feel that the abstracted shape in the middle, half immersed in the ocean has some sort of symbolic meaning. The lens is the XA:s 35 mm. The wider lens composition adds a necessary layer of context to the picture. 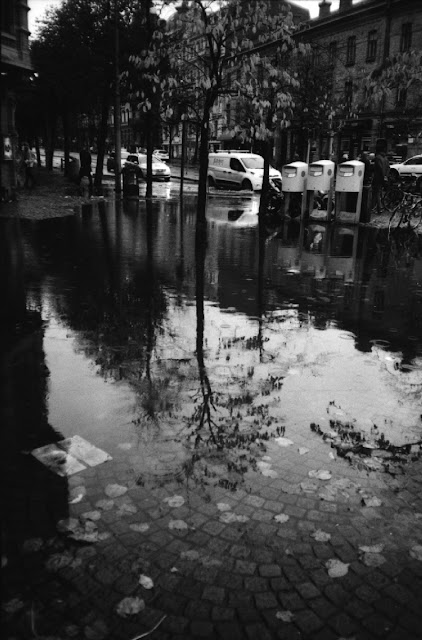 Here's another flooded Gothenburg scene, courtesy of the XA. Hello Gare Saint Lazare, dare I say it? As inspired by! With a 50 mm lens I probably would have made other choices concerning the composition, resulting in another image entirely. 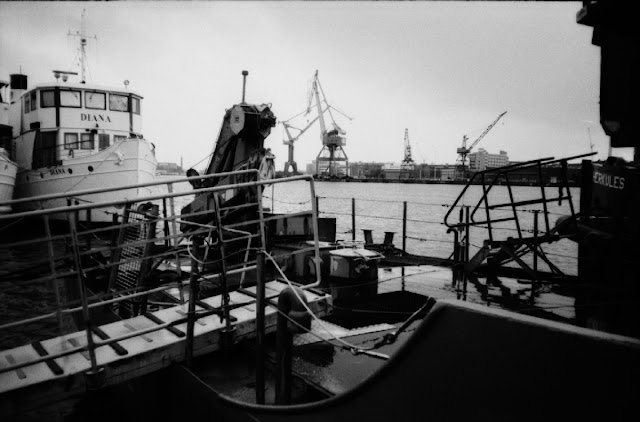 Me+wide-angle+clutter. It adds up to confusion? or exhilaration? I suppose this is one of my better wide-angle photos. XA did it. 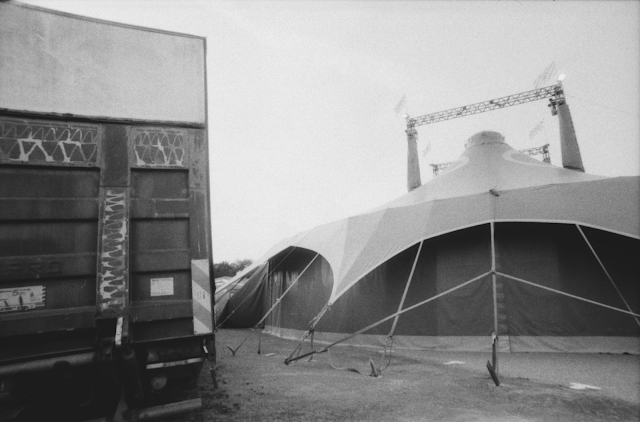 Playing with bended shapes and criss-crossing lines becomes rather easy when using the 20 mm. Had I taken another one or two steps closer the composition would have been better I think.

This is what happens when the 20 mm is too wide since there's a fence stopping me from getting close to the sheep... Oh what interesting combination of rounded sheep and the round bales - and the tufted grass combined with the sheep's wool. 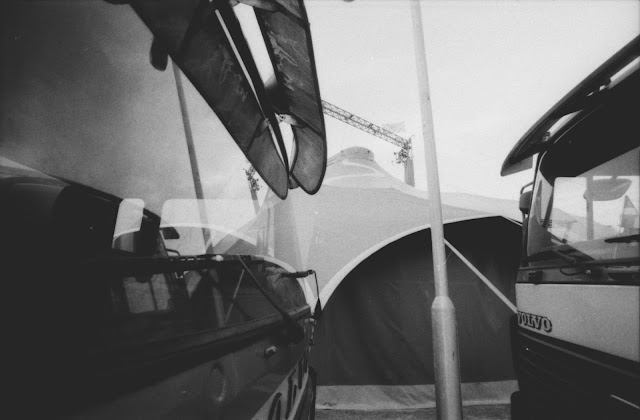 Another 20 at the circus. Exciting rounded shapes continuing into the reflections in the lorries' windows. 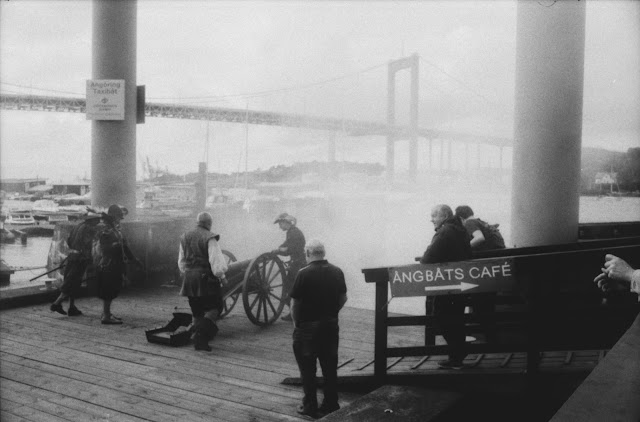 A perfect situation for the 37 mm Mir-1 lens, capturing the center of action as well as the eventful context. 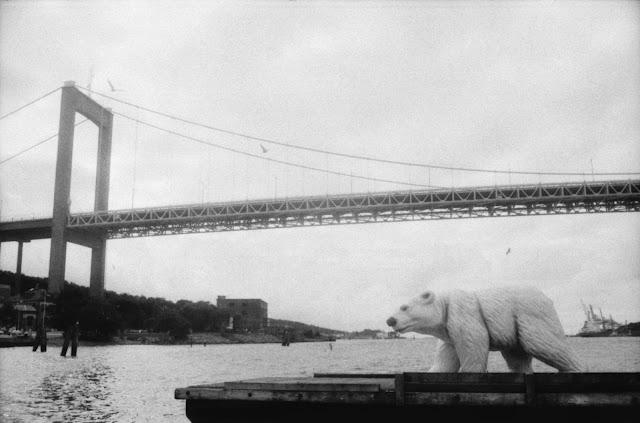 Playing with lines and directions. Note the corner distortion even on the 37 mm in the nether right corner. 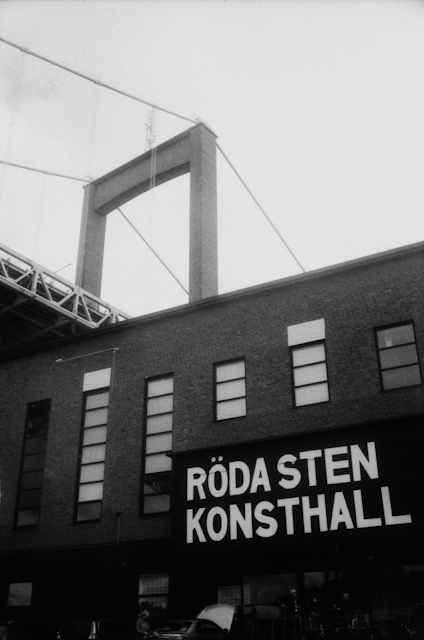 Context and playing with the scale of things. 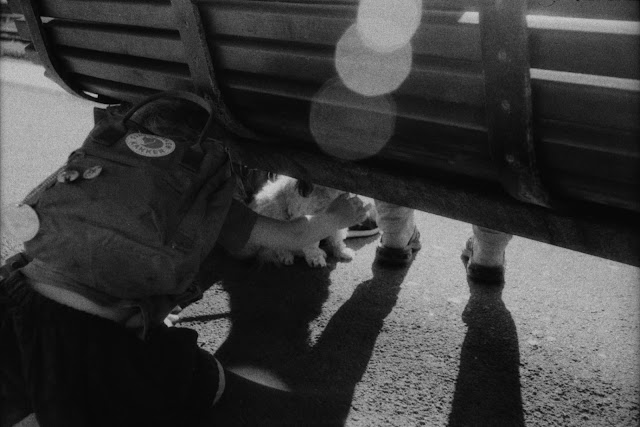 Getting close to the action - but also capturing the close context. That's what wide angle lenses are really good for. 37 mm Mir-1 lens. 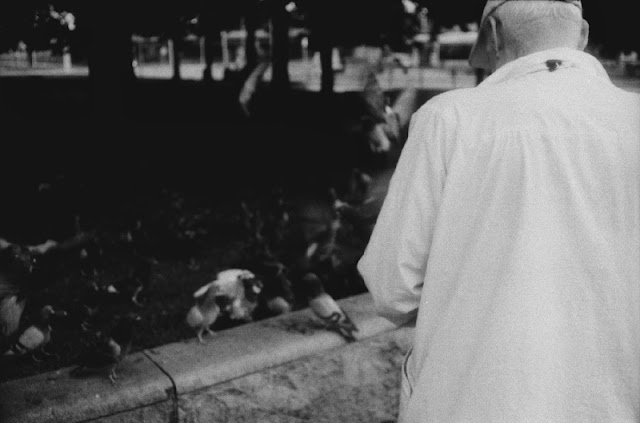 Using my 35 mm Canon lens on the Canon P. Another example of my search for meaning in clutter.Trying to find exciting patterns and forms - lines and circles.

Had I been more confident I'd have been sitting there for some time trying to find the ideal photograph. The context of the fruit shed is exciting enough, and people are interesting, generally, so some patience please. 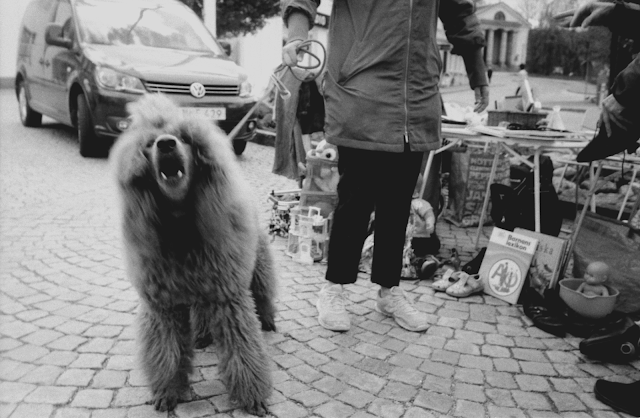 Another moment captured. In the spur of the moment the disturbing car was included, which is bad for the picture. The photographer needs to move - position (of the photog) and composition (of the subject(s)) are what photography is about at its core. 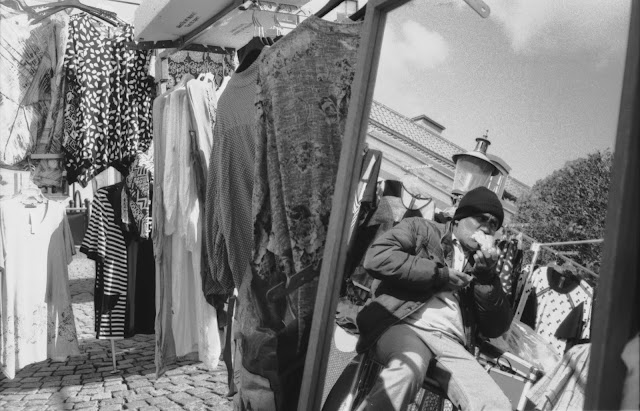 Concluding words:
The routine wide-angle photograps produced with our smartphones are now the standard. In my view they are too wide. And they often distort what's in the picture. That's why I keep using these old cameras. I most often like to take more "narrow" pictures but at the same time make experiments with cluttered subjects. It's an ongoing search.
What's a good photograph?

May 28, 2020
This is what came out of an outing to see what my recently aquired Bilora Bella 44 was capable. I also tried a new (to me) film.

The Bella is a 127 format camera which produces twelve 4x4 cm exposures on the 127 film. The film I tried is called Rollei Crossbird Creative, ISO/ASA 200. Under that name it is a film to be cross-processed - i e developed in colour negative chemicals even though it is a (dia) positive film. I gather that this use of the film makes the colours go all "creative".


I decided to expose it as a positive film, though - mainly since I hadn't intentionally exposed any positive film before.


Seeing the scans I can gather that the original film is a dia-positive film for tungsten light, since there is a strong yellow hue to the photographs even though they were exposed in strong (afternoon) sunlight.


I am very happy with the way the photographs turned out and can conclude that this trial run of the Bilora Bella 44 has me wanting to use it more.