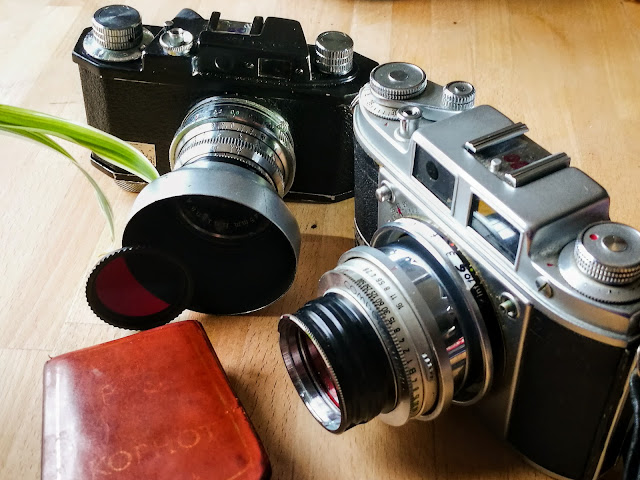 Oh, all right! I won't use the same film stock in both cameras this time! It's because these two are my last 400 ASA b&w films and the specs are similar. 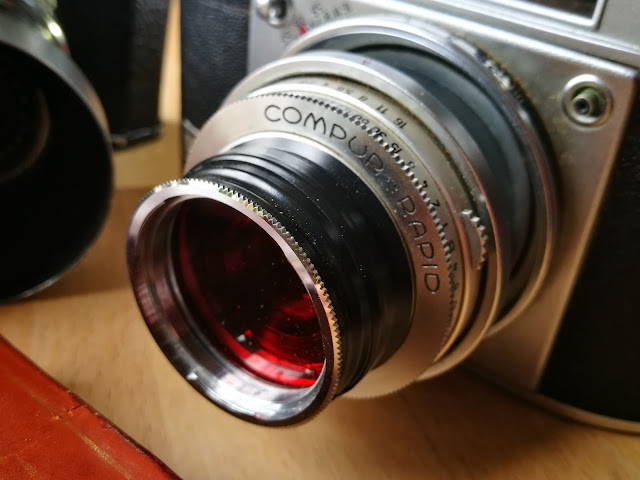 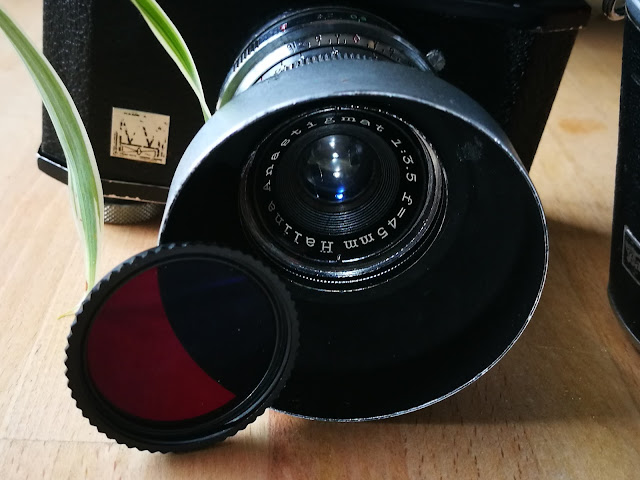 Another spec is Red Filter! I will expose both with red filters. The Halina at 50 ASA and Baldina at 100 (compensating for the light that the different filters block). It will be interesting to see if the results can be compared to orthochromatic films I intend to use later on in this project. I really like the 'colour' shifts that occur with that type of film (and in-camera photo paper). The ortho film and red filters block out certain colours, rendering them darker on the photographs.

The first camera is my Balda Baldina 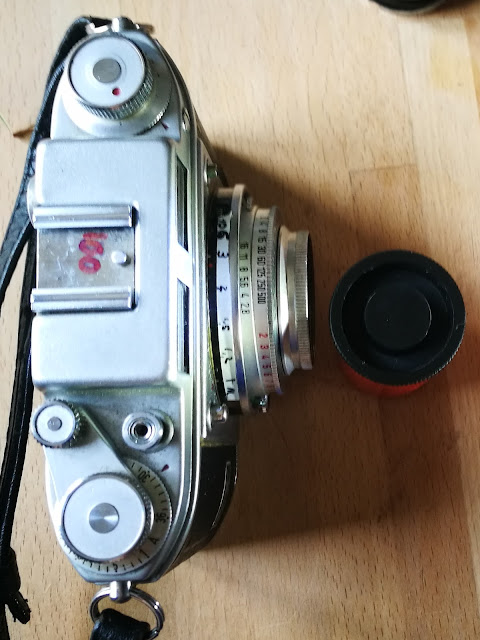 I am very curious to see how I like this camera. A long two years ago I exposed one roll through a sibling camera. There is a Baldina without a rangefinder, which is the first version I tried. And I came to like it a lot in the process. The camera was gifted to a friend shortly after that, but not before I'd put a winning bid on an identical version, though sporting a rangefinder, which is this one. This will be my first roll through it - the Ilford Delta.

The second is my Halina 35X 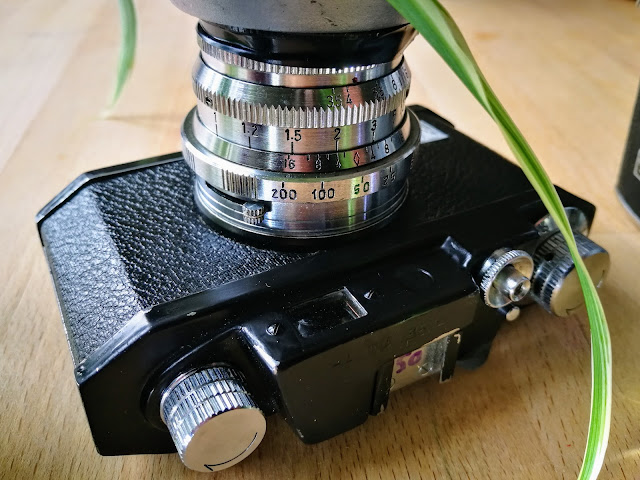 For the avid reader(s) of this blog this camera is no stranger. I've written several posts praising this little thing and showing off photos that I like very much emanating from its little (just enough) flawed lens and shutter.

I suppose that this pairing of cameras is a chance for me to really enjoy myself with two favourites. 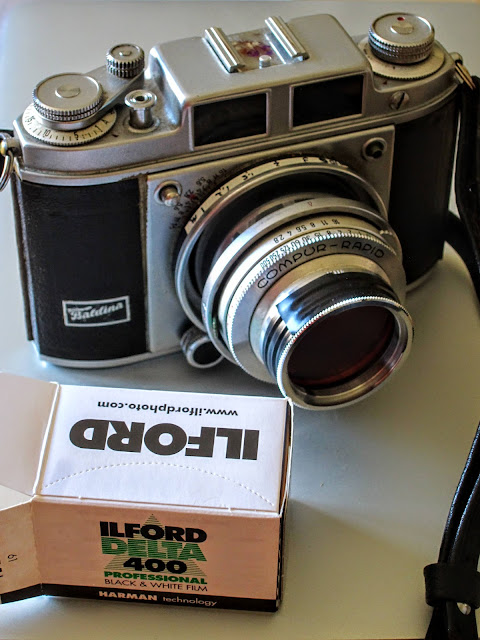 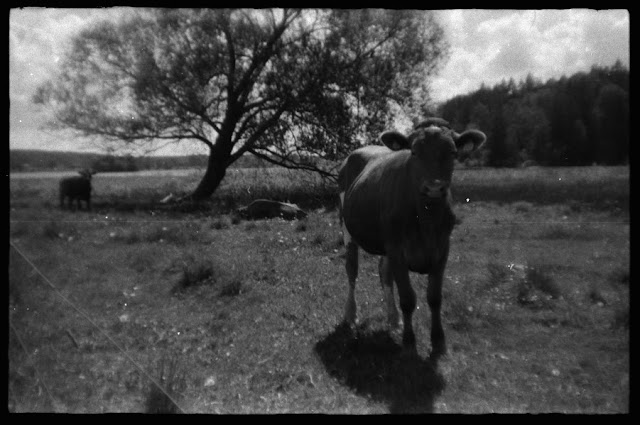 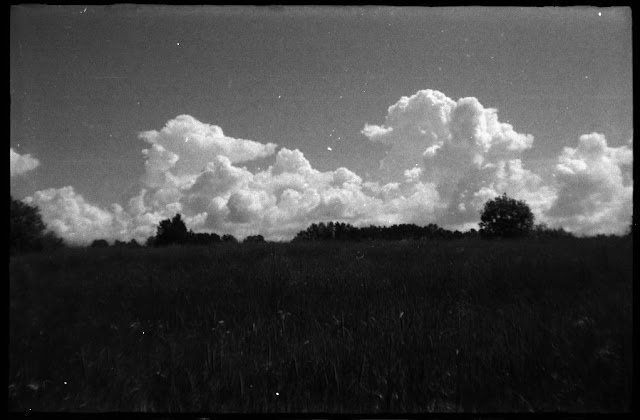 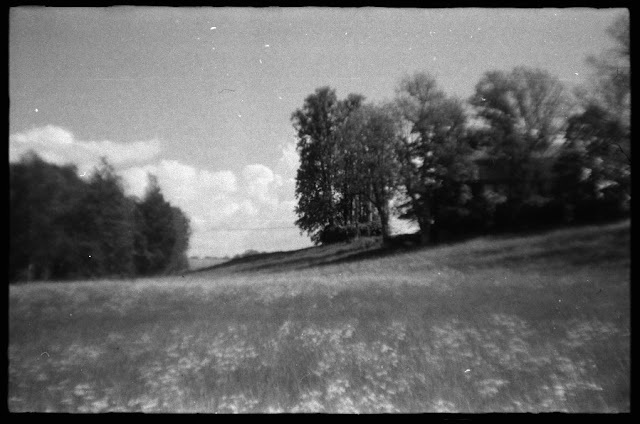 What really strikes you when you see the scans is the lack of focus in most of the photos. There is a circle of focus in the middle of each photograph with ugly blur outside of it. 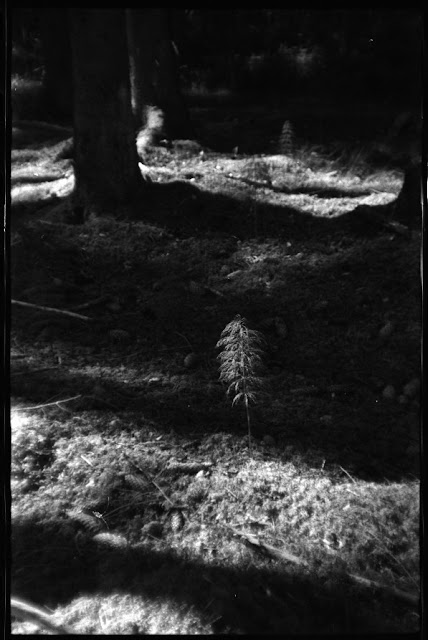 It works alright in some rare cases, but disturbs me in most. 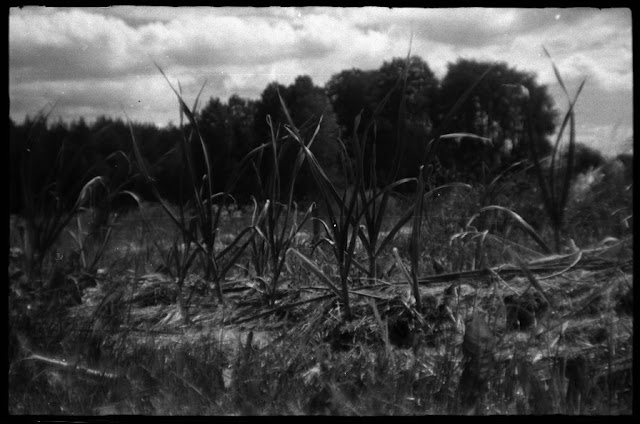 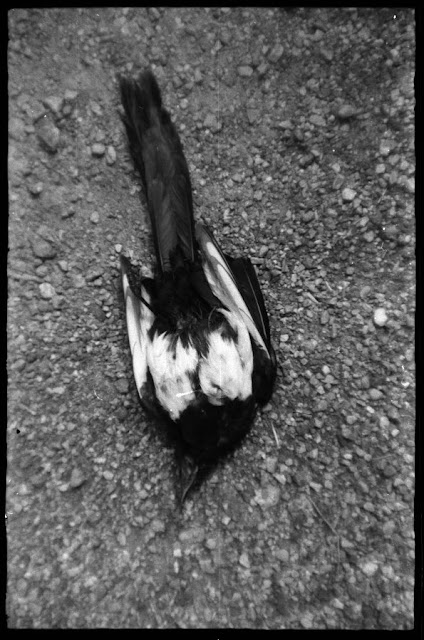 So now I know this to be a true 'effects' camera to be used for the centre focusing effect.

However to be fair I have to try how focus rendering works with the other aperture settings, like f/8, f/11 and f/16. Maybe they are magical! 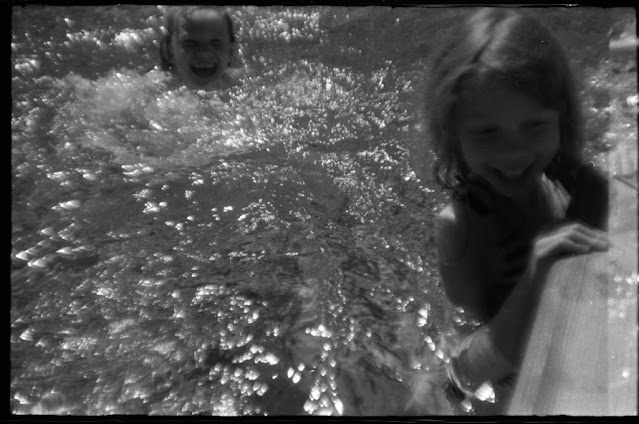 The camera was a joy to use, though. It has a pop-out lens! (Much like the Minolta Hi-Matic C which I like a lot.) 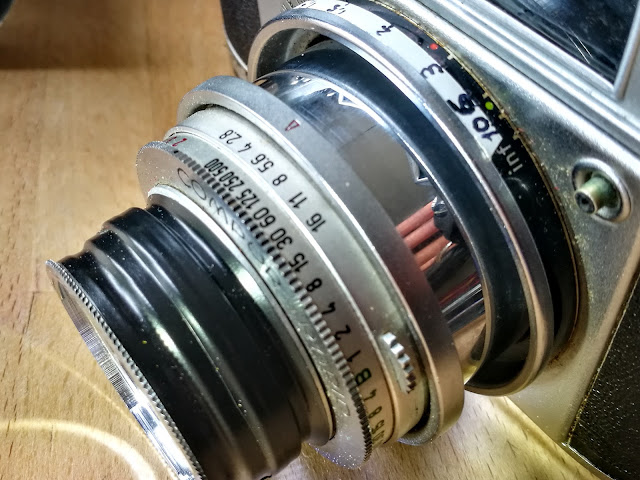 Pop-ular views aside, the focus-throw is good and short, aided by a good-sized knob. The pop-out/push-in lens makes the camera more portable, reducing its thickness by ~2 cm - it's even (coat) pocketable, unlike the Halina. 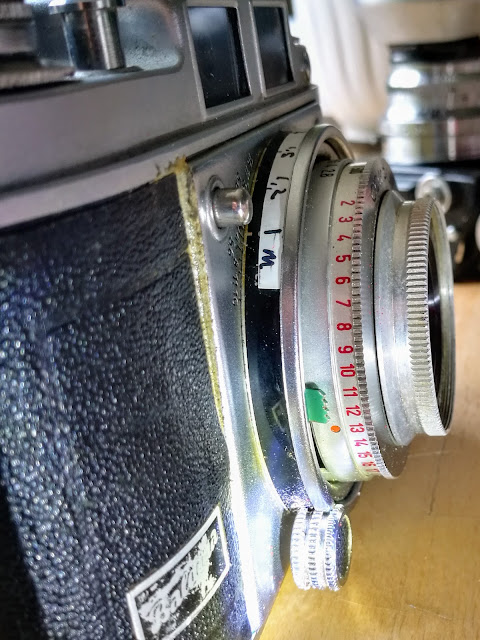 The shutter and aperture control rings are hooked together, so it's easy to change settings to control depth-of-field in similar light conditions without having to think. It's also easily done to unhook the aperture ring to change it - it's done by pushing the aperture ring slightly askew with the help of a little knob. If you're into exposing by EV-values the camera offers you that option.

Being an all-metal rather heavy thing its weight adds stability to my exposures. Exposing the film in this way with light-stealing filters most of my exposures are made at 1/60th or 1/125th. 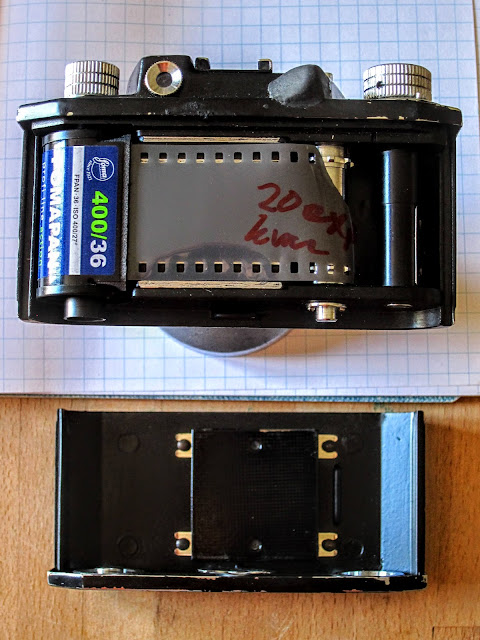 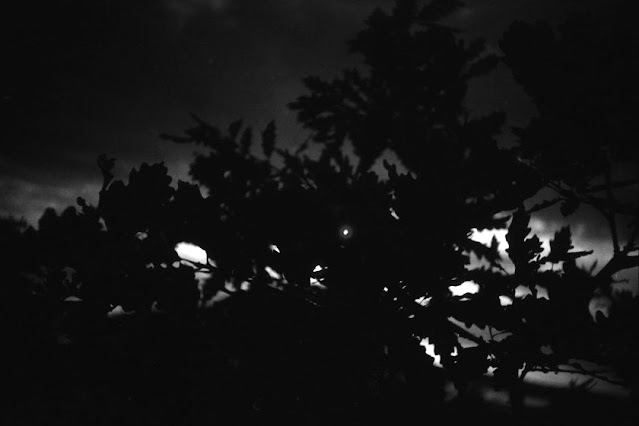 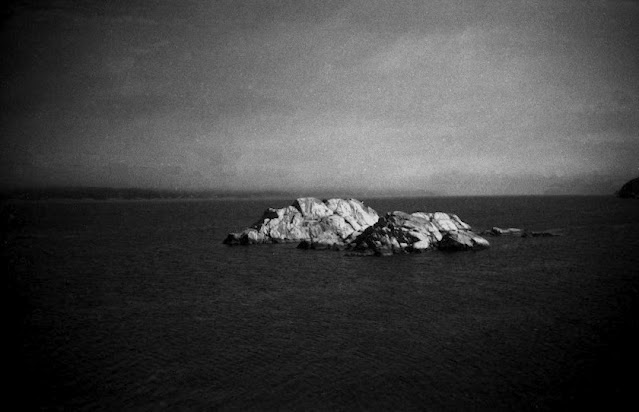 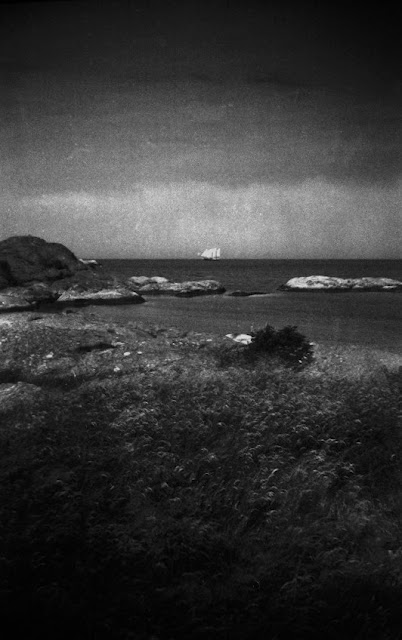 As you can see the lens can't expose evenly over the frame which adds the darker corners, like looking through a key-hole. It's an effect that I like. It adds character. The lens is quite sharp actually, contrary to preconceptions, even at f/3,5 - wide open. [It was Made in Hong Kong in the late 1950s.] 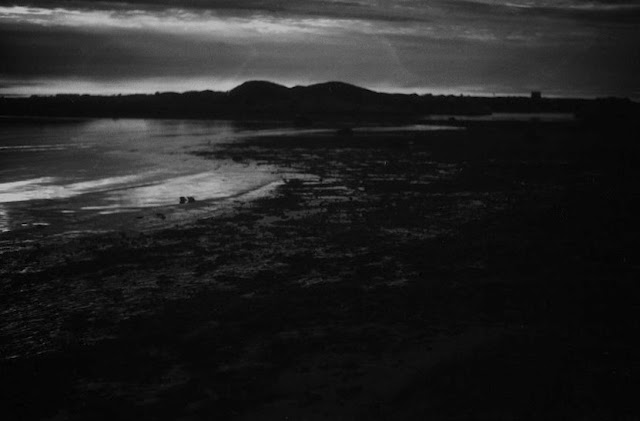 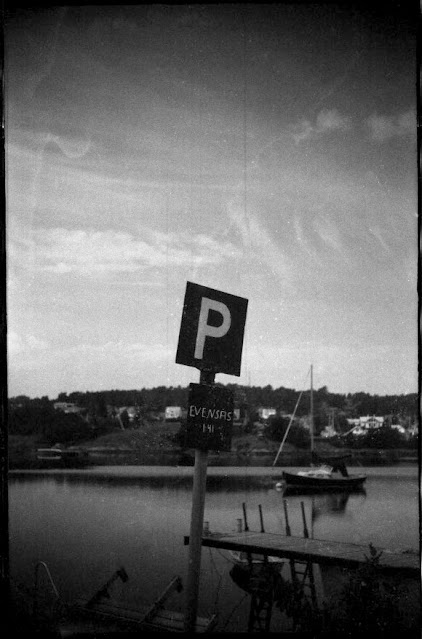 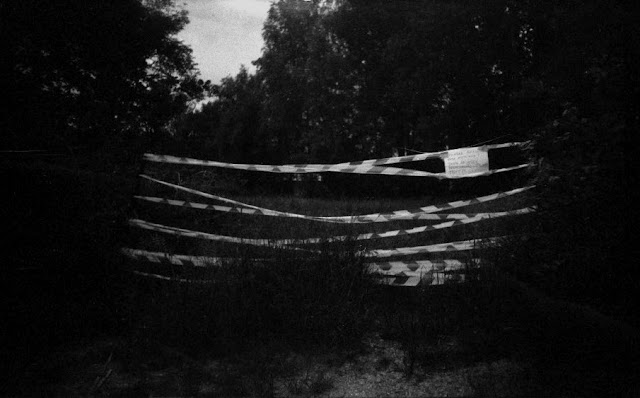 The Halina is also all metal and glass. For such a small camera its weight is at first surprising.

The shutter times are B/25/50/100/200. Focusing on mine is far from smooth, but I initially 'excercise' the lens a bit which makes it run more smoothly. The focus throw is commendably short.

To make an exposure I have to wind the film, then cock the shutter with the little lever on the left side of the lens. It is possible to lose exposures if the shutter is tripped but hasn't been cocked, so don't cock up!

The two red filters were of different grade/strength. For the Halina filter I added 3 stops of light to the 400 ASA film resulting in exposures for 50 ASA. I worked a lot with exposures at f/5,6 with 1/50th shutter time in daylight conditions in overcast weather.

The Baldina red filter looks to be less "strong" so I added 2 stops of light resulting in a 100 ASA exposure.

Seeing the resulting photos I am a bit surprised that the red filters didn't add more character. Of course I mostly used them for nature and outdoor exposures, so not much variation in subjects. I suppose that some of the character loss is due to the exposure latitude of the 400 ASA films - they can handle most lighting situations, so even out the 'bumps'. The main characteristic that occured is the dark skies (blues).

Again the Halina shines in its imperfections. I even dig the landscapes.

The Baldina is a huge disappointment. Even at f/5,6 there's this strange centre focus area. And the ugly bokeh in the out-of-focus areas.

I developed both films in Ilford Ilfosol and used Ilford fixer.