May 01, 2017
Some time ago I reached out to former customers of mine who'd bought cameras from my webshop getOurBooks at Etsy. I've - since starting to sell the cameras two years ago - wanted to know what happens to them. Through the "getOurBooks Recap" some of the cameras get a story.

A lot of the submissions are awarded with really exciting token gifts. It is not too late to contribute!

Here is the third contribution:


This photo was taken in the sculpture garden at the De Young Museum in Golden Gate Park in San Francisco, California. This is an exterior view of James Turrell's Three Gems, one of my favorite places in the city. You follow a plant-lined path down into the sculpture and enter a labyrinth-like path to the center of the underground chamber. Once inside, you can enjoy the circular skylight in the cement echo chamber. I shot this photo on the Olympus XA3 using experimental hand fogged film by Dustin Adams. I really like this photo because I think it does a good job of capturing the lush and alien landscape of the expansive park.

This photo was taken on a rare warm day at Baker Beach in San Francisco. I capture this moment of my girlfriend looking for dolphins swimming under the Golden Gate Bridge in the distance. I really like how the light was reflecting off of the wet sand, and the silhouettes in the ocean mist. This was also shot on the Olympus XA3. 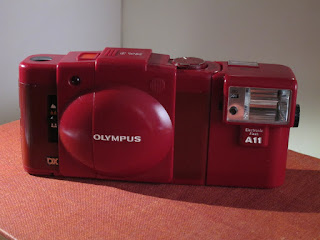 Here is the Olympus XA3 that I purchased from GetOurBooks, it gets a lot of positive comments on its unique color and design when I take it out shooting.

Thanks! Looking forward to seeing the other submissions!