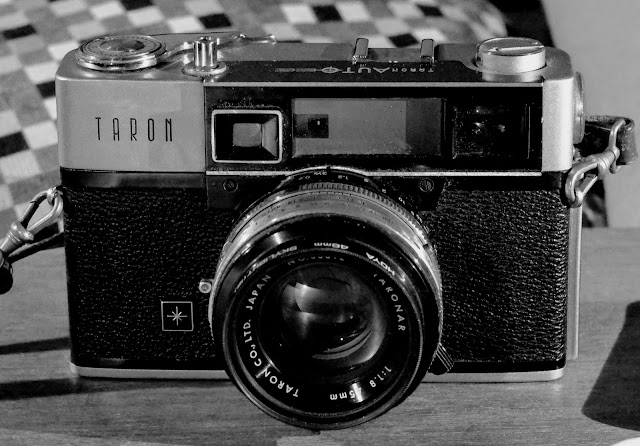 The first camera is the Taron Auto EE

This is my first time using this camera. I have owned it for under a year now, having it sit in my cabinet since bidding it home for a pittance. It did catch my attention, with that protruding box-thing. The Eye!

The EE in the name must be the 'electric eye' - i.e. the light meter. In the old days that was certainly not a given in consumer level cameras. Neither was a f/1,8 lens!

Like many times before I was amazed by the fact that I could acquire a camera with that great lens specifics for such a low cost. It is certainly a low-light lens. I have f/1,8 lenses for my Canon cameras and my Nikon mount, and they are a dream for someone as fidgety as me. Opening up the lens enables me to use faster shutter times. 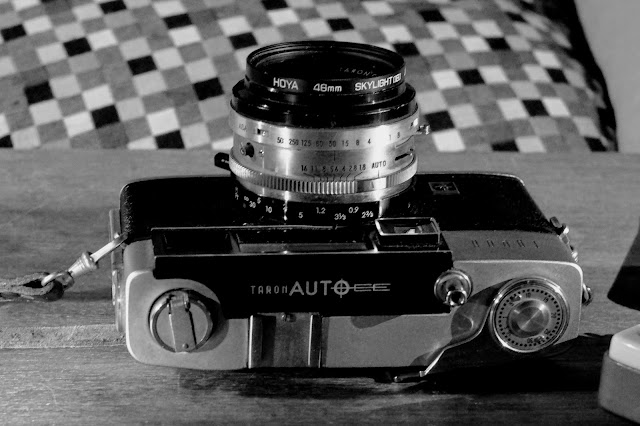 The camera is heavy. You can almost see it. It appears as if no details are made of plastic. I can imagine me getting bruises on my hip from carrying it for a day it's so heavy.

There are no oddities about how you expose your photos with this camera. Everything is there on the lens housing.

I haven't tried the light meter. You may see a trend in me not doing that, even though the cameras in this project sometime sport meters. I rely on my hand-held meter, no hassle. In the viewfinder there are exposure indicator lights which show when you're on the right track with your exposure settings.

I am not sure what the camera will add to the photographs we will produce together. Will they be tack-sharp, bright, no objections-photos? What is the character of this camera's setup? Will I use it as a reliable low-light (semi-) compact in the future? Let's have a look at the photographs... 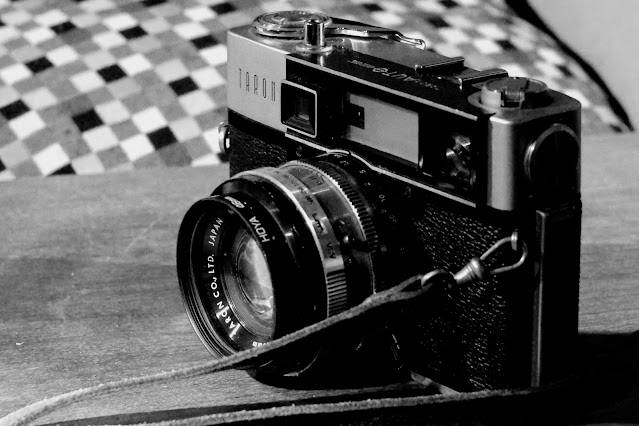 They made this one a bit daft in one or three ways, didn't they? 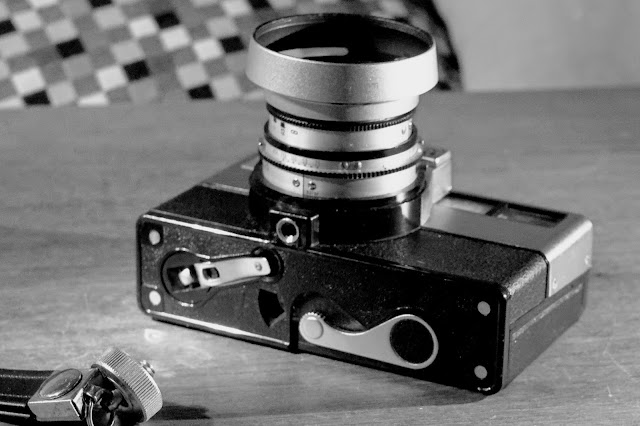 I have used this camera before. My first 35 mm roll of redscale film was exposed through it and I loved the resulting pictures. The lens is good and sharp - much better than I expected. Exposure is possible in full manual mode. I haven't used any Auto setting as usual. There is a selenium cell positioned in the ugly 'brow' above the lens which may or may not work on my camera. 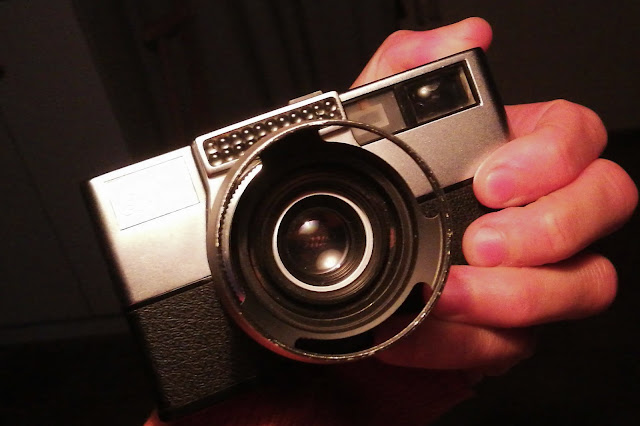 This camera appears to be all plastic, apart from the top plate made from some thin sheet metal. But appearances deceive. Most of the insides are metal, making the camera rather heavy/steady. Why Adox would choose to have the film door - which is the most exposed piece - be of a plastic material prone to cracks eludes me. Especially since the film door is detachable - no hinged door - which makes it easy to accidentally drop to the ground.

Then of course - the shutter release. Who came up with that design? 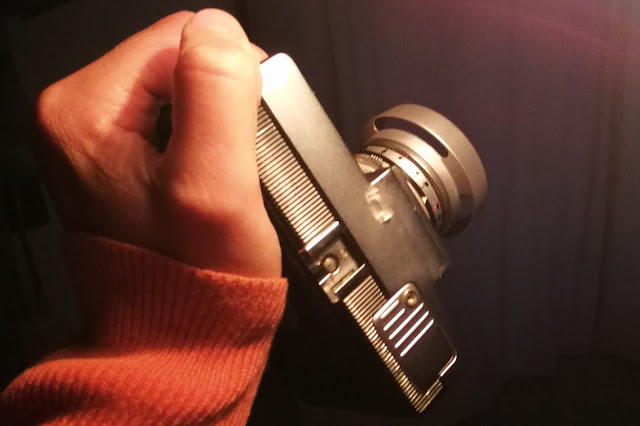 It's that big square thing! You push your finger deep into the camera body when making an exposure. If you listen really close you can hear little clicks and whirrs while you press it to the bottom. It's the sound of frame counter advancing; shutter being released and then tensed again; and wind-stop being released. 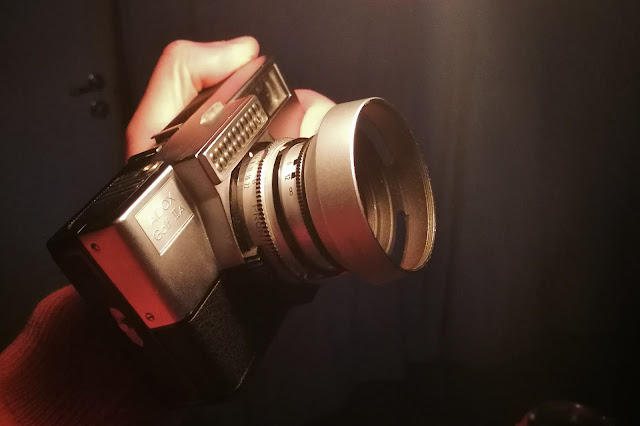 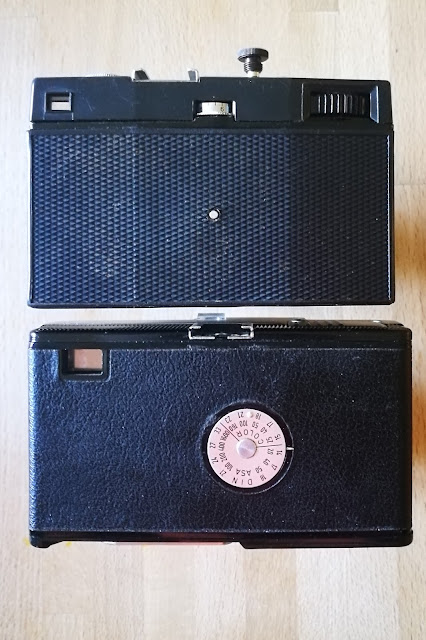 While not making a general comparison (maybe I should?), the above picture shows the Adox sitting below a Lomo Smena 8M. It's there to show the similar sized viewfinder windows of the two cameras. However the Adox finder is much better - it shows clear framelines and some space outside it making it easy to compose on the fly. The Smena finder shows only what's in its 40 mm frame. Plus if you're a wearer of glasses, it's neigh on impossible to see all that's in the frame because you can't get your eye close enough to the window. So, plus points for Adox.

I love using the Adox. It's a very tactile piece of machinery, once you get to know it. And I always know that the resulting photos will receive a sheen of something unique, though not amazing.

The film: Washi A

This is a high contrast, low ASA/ISO film intended for something else than photography, namely making titles for movies. But if you dose it in enough light (12 ASA) it has a great creamy look and deep blacks, and it's orthochromatic. I absolutely love the look of this film - and its Washi companion the S (50 ASA). I was particularly excited when I loaded the Adox with it. Let's have a look! 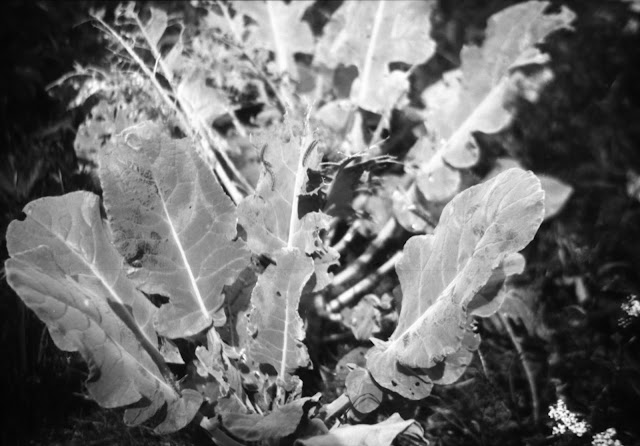 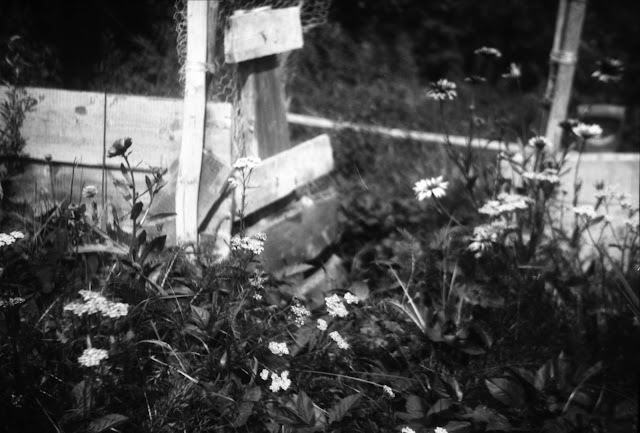 It is a challenge to hold the camera still at f/2,8 and 1/30th or 1/15th of a second with that (THAT) shutter button. I think I did a god job at composition mostly, though. 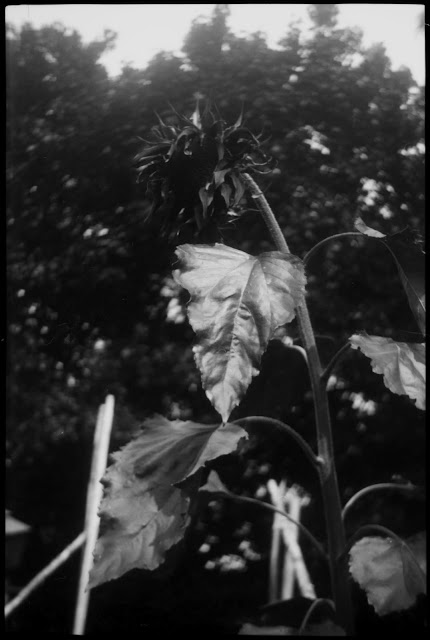 It's a sunflower! The greens and yellows go all bonkers with this film! 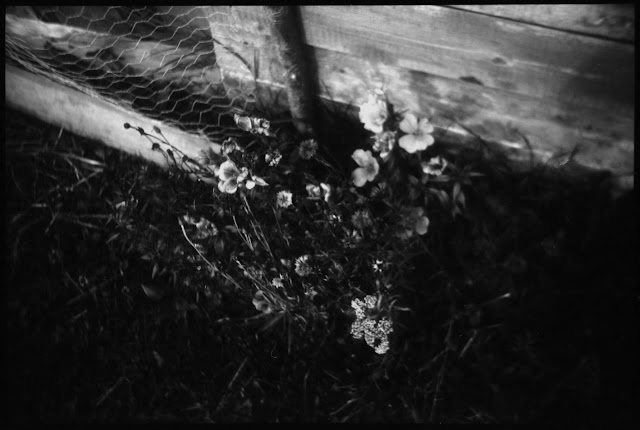 The lens is not sharp wide open, perhaps only within a tiny circle in the middle. I will try it with 1600 ASA film soon, to see what the lens can actually do. In the past it has been sharp at f/5,6. Of course camera shake is an issue here too. 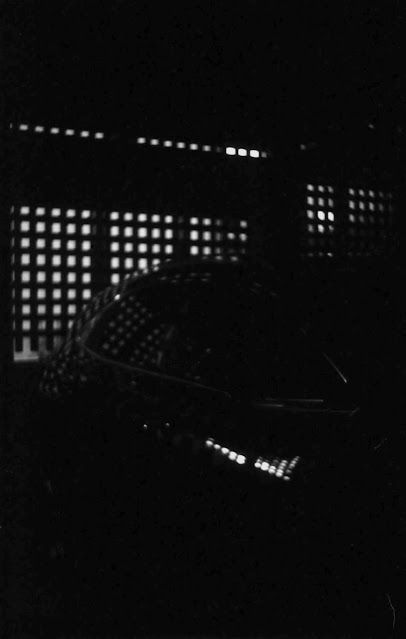 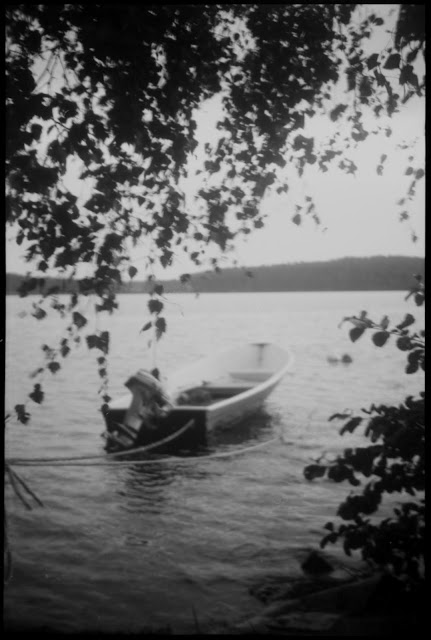 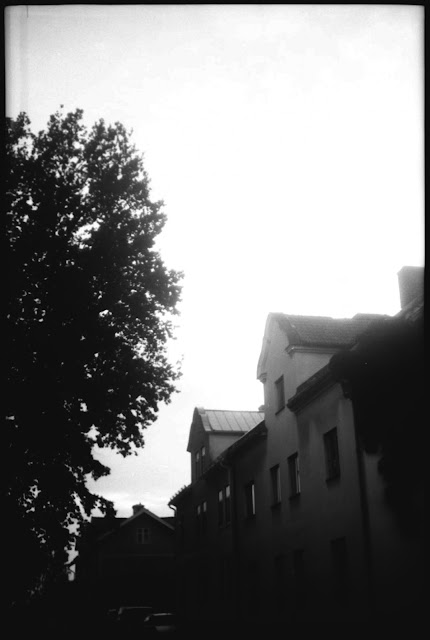 The lens is prone to flare when aimed at strong light sources. 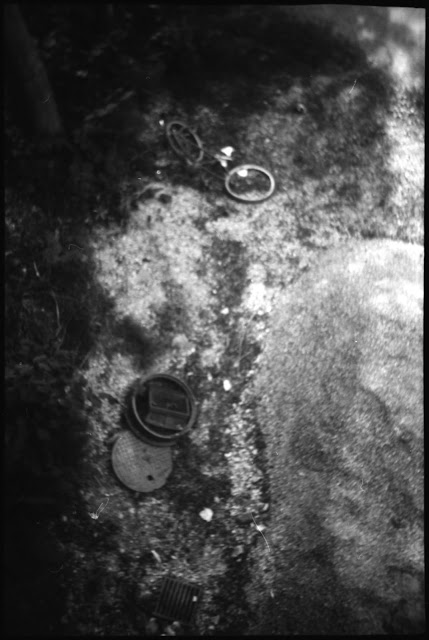 The above photo was meant to be sharp, evidently. I wish that it was. 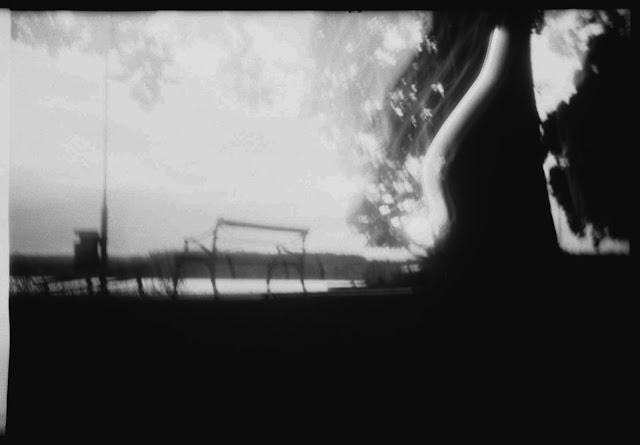 In two places on the film negative there were several overlapping photos. I must have been sloppy when not tensing the film while loading it, making the wind-on cogs miss the sprockets. A couple of frames had the kind of issues seen above - 1/15th shutter setting must have slid over to B mode. I rather like this one. 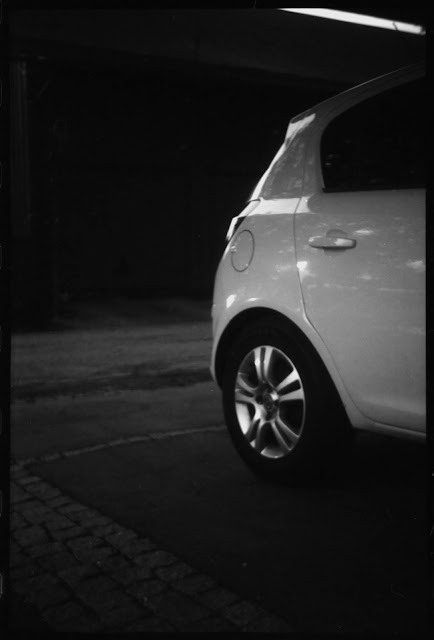 This car sat in the most beautiful sunset sheen. The film treats it wonderfully. The lens makes the focus far too soft. 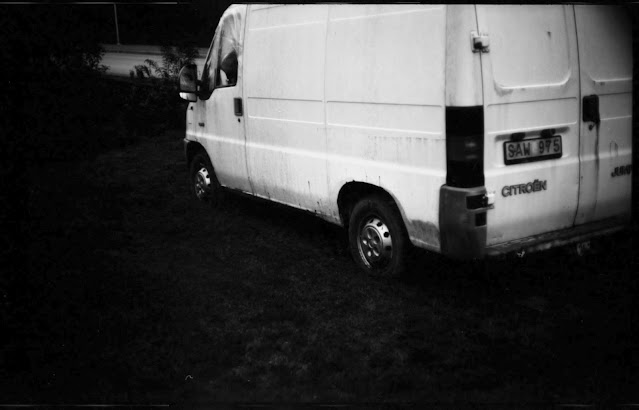 I don't love this camera. It has wonderful specs - fast lens, lots of exposure choices from slow to fast, deep to shallow. 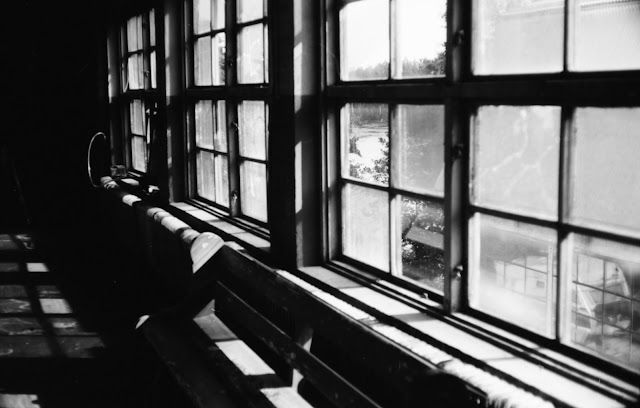 Maybe it's in combination with the film. I don't love the Washi A film. Well, I love the look. But not the cumbersome low ASA/ISO rating. I'm a handheld guy. Maximum aperture plus 1/30th in broad daylight don't sit with me (anymore). 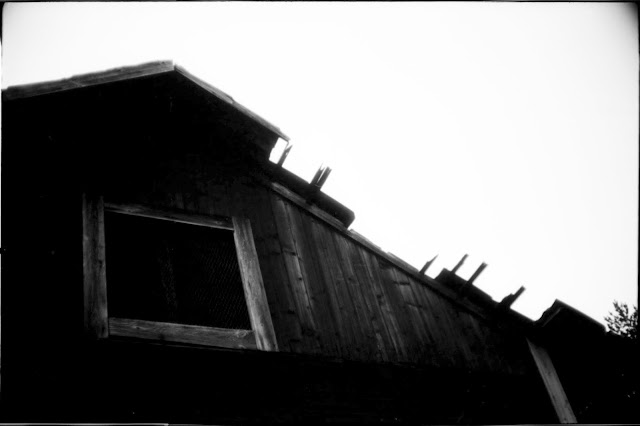 I'm not super adamant on sharpness. As you can tell if you see my photography on this blog. But I prefer the blur coming from the lenses I use, not the camera shake that is likely to occur at 1/30th or 1/15th of a second exposures. 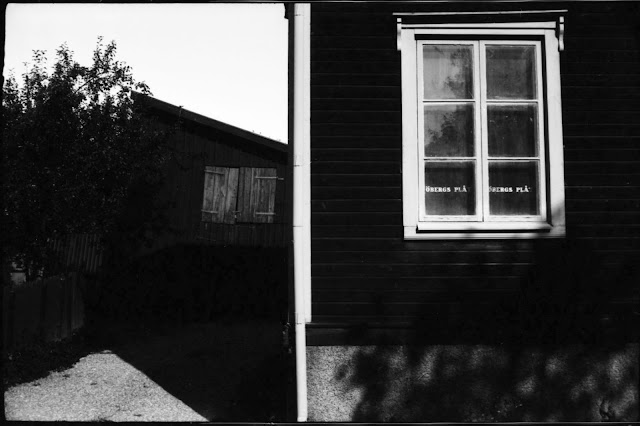 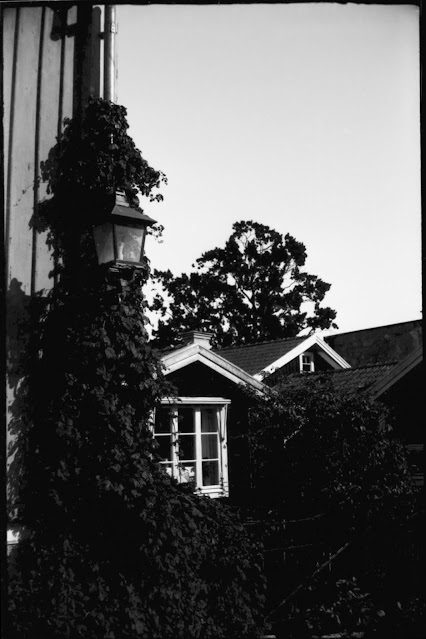 So, I hereby abandon 12 ASA - and slower - films. The Taron I will give another chance with faster film. If it doesn't make the cut I will sell it. 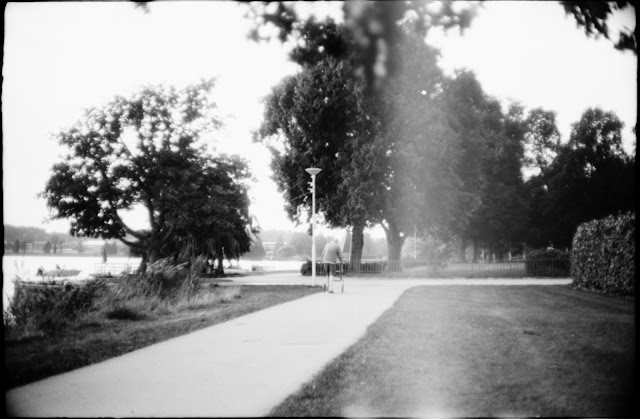 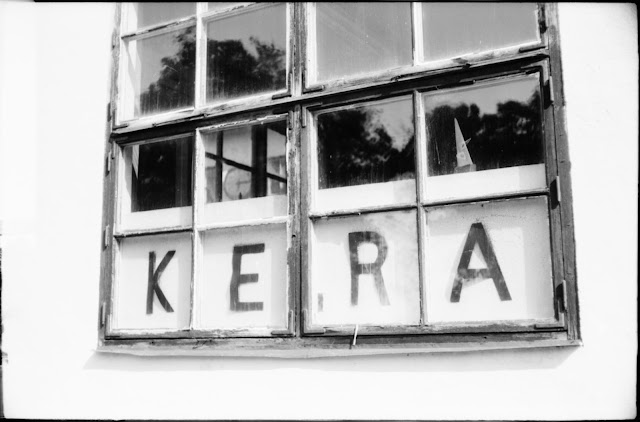 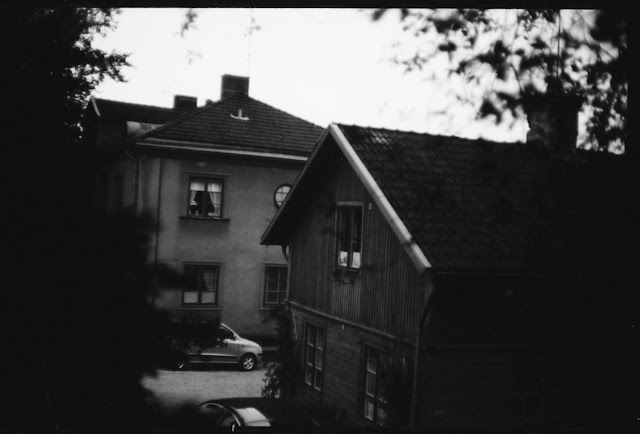 I do love most of the photos I could make with this month's cameras. In the circumstances their specs weren't optimally used. But we got the job done mostly thanks to this unique film type.