April 24, 2017
Some time ago I reached out to former customers of mine who'd bought cameras from my webshop getOurBooks at Etsy. I've - since starting to sell the cameras two years ago - wanted to know what happens to them. Through the "getOurBooks Recap" some of the cameras get a story.

A lot of the submissions are awarded with token gifts. It is not too late to contribute.

Here is the first contribution:


I purchased an Olympus XA from you over a year ago. Since then, it has become my main camera, replacing an Olympus OM-1 and an Olympus Trip 35.

I have rarely shot with another of my cameras since I received this. I've taken it to Denver, Seattle, San Diego, and New York City twice.

I shoot to document my life, a lot of coming across as a street type of photography. I primarily use Ilford XP2 film for its graininess and lack of hue.

I don't have a picture of my XA, sorry. I'm usually the one behind the camera and I don't have any way of capturing a digital image.

(Editor's note: Below is an image from the listing:) 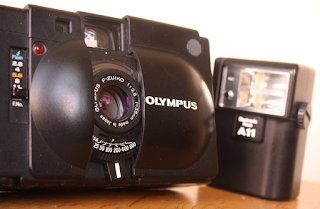