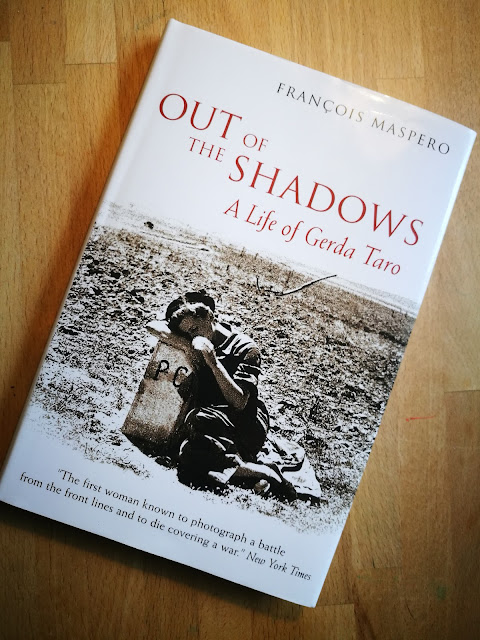 She was an emigré publisher's assistant turned freelance photographer. Gerda Taro made a name for herself (literally, too) during her few years as a photojournalist, before her untimely death in 1937.

Born Gerta Pohorylle into a Polish-German jewish family, as an adult she relocated to France in 1933, trying to make herself a living in trying times. Meeting migrant people like herself, working for anti-fascist newspapers, she utilized her skills initially in editorial work.

Being a person of integrity and with a progressive personality, her friendship with writers and photographers like the other emigrés Ted Allan, Endre Friedmann and Dawid Szymin led her to work with photography as a storytelling medium. In her case intended as a way to shine a light on what was happening in the Spanish civil war (1936-39), and on the rise of fascism in Europe. This was the birth of documentary photography as we know it.

Seeing photographs on a contact sheet can sometimes tell another story than the individual image. The contact sheet may reveal how the chosen photograph came to be, showing photos taken before and after.

A photojournalist gathers material, to have a collection of photos that are useful for the publisher's intention. It is rare that the public have a chance to see more photographs than what's intended for publication. The published photos are there for a reason, of course. Other photos - as seen on the contact sheets - may not be good enough at relaying the message. Therefore they end up forgotten. They may still be great photographs in themselves.

What contact sheets can tell us is the process that surrounded the better photo, how compositions were tried, or events that led up to and occured after it. They can give us tools to analyze the stories that were told, what was omitted and what circumstances makes a good photo a good photo.

Documentary photography is always storytelling. You tell stories with individual images - but less often when you think of it. Instead the collection of images intended for publication is the work of the documentarist. Because the choice of photos and the sequencing of them interplay with the written text, and thus contributes to the full story.

Gerda and others, working with reporting from the war effort, already had publication in mind while out in the field.

It's like from a novel. Many years after the war in Spain, in 2007, a mysterious suitcase came to attention in Mexico. It was packed with negatives marked 'Capa', 'Chim' and 'Taro.'

They were negatives moved by courier from Spain to Paris, to be used by their publisher. Some were printed to be published, but then disappeared to... where? It's part of the mystery. The International Center of Photography were the recipient of the 4500 negatives lost since 1939. A massive book with contact sheets of all the photos and some enlargements was published, along with an exhibition which has travelled the world since.

Seeing the photos in sequence, and knowing some of the editor's choices in regard to publishing, and the storytelling it was used for, helps us understand the work process of Gerda and the others.

My main lesson learned from immersing myself in the work of Gerda and the photographs from the Mexican suitcase is that the work of the documentary photographer (or in modern terms 'photo journalist') is indeed immersive. It takes commitment, passion, and financial stability to get by in this line of work.