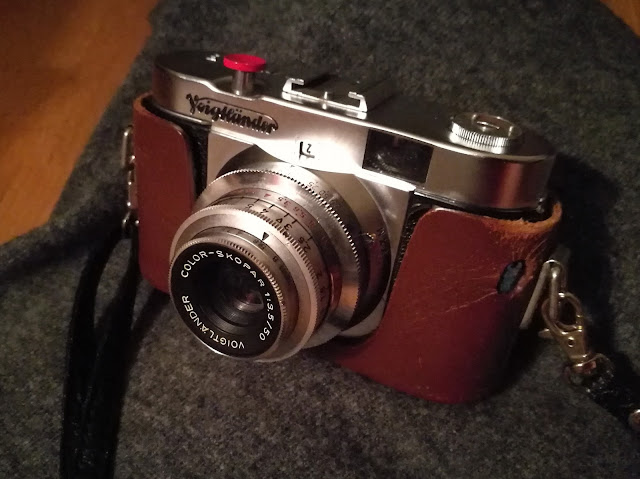 I've arrived in Stockholm which is the site of the Stockholm Fotomaraton/Photo Marathon the coming weekend. The pictured 100% analog camera is what I'm using to prepare. Today and Friday I'm making photo excursions to various spots in the central parts of the city to prepare for what's beginning Saturday at lunchtime. Being a former native of the city for four years - though that was more than a decade ago - I know my way around. New things are popping up though, like high-rises and new pedestrian streets. Gentrification is going into light-speed in some neighborhoods.
I'm using an old "reflected light" light meter and for rangefinding - because the camera hasn't any way of telling if you are in focus or not - am using zone focusing or guesswork. Though, I've brought my carpenter's digital/laser distance meter.
I'm exposing on black & white film which was predominant when the camera was made in the Fifties. Using the camera and film gives me that time-travel vibe I want and actually experience quite often. Somehow the era of black & white film is ingrained in me (us) to the extent that using the old technology gives me these feelings. Now, that's cool! Thank you Eugène, Gerda, Robert...

By the way, the camera to the left is my Chinonflex TTL sporting another new 'pancake'. The Industar 50-2 50 mm with M42 mount is from an Etsy seller in the Ukraine (the other 'pancake' came from Lithuania). The lens is very nice to handle, and makes even the chunky TTL kinda compact. I've finished a colourfilm roll with the Chinonflex and will come back to it in a post eventually.