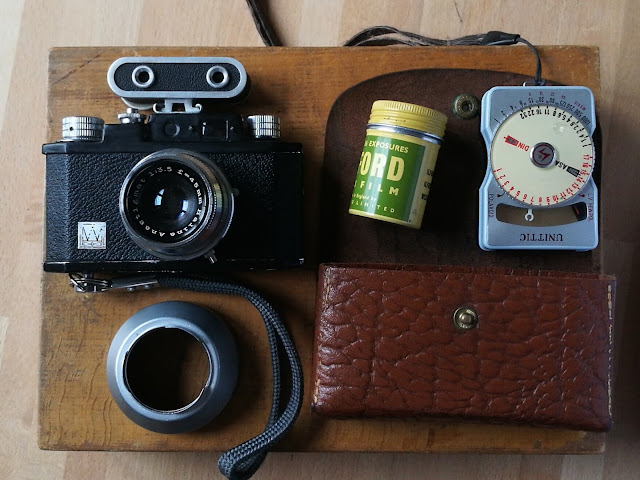 I want to write a little something about this kit which I will use a bit during the summer. There is an older post about the most recent roll I developed from the camera here.
The most important thing in the picture above is to the top right: The light meter! This one's a Unittic - I'd never heard about the brand before. It works - that's the whole point. A used light meter is easy to find at a very decent price. Mine was €20 including shipping from the Swedish auction giant. There is an abundance of light meter apps as well. I prefer to keep a real one in my back pocket, though. Most light meters produced 1950 to 1975 were selenium cell based, I gather. That means no need for a battery. It also means that when you've found one it may not work properly even though the metering needle moves, so one needs to check it for accuracy before use, which is an easy task.
I keep my light meter with me so can use a camera of choice depending on the purpose of the day's photography. I happen to keep a good 5-6 cameras loaded with film in the bright season so can bring any one of them along and get good exposures for sure.
Mostly I measure for skin tone minus one step. So if skin tone is 1/125th at 1:5,6 (with 400 ASA film) I expose at 1:8. I just point the light meter to my hand which I hold in the preferred light.
The next thing in the picture I want to mention (in no particular order henceforth) is the case with the snap button. It is the perfect size for keeping the light meter and/or some rolls of film. I just hate it when I have to dig around blindly at the bottom of my bag to find my film. It's much better to keep the small items collected in one place.
I just love the old metal canisters for film rolls with the brands printed on them. This one doesn't actually contain an Ilford film but a Rollei 400S, which I've bulk loaded.
The metal lens hood is an important accessory. In my case since I use a lot of older cameras and lenses which have foggy or scratched glass because of old age and extensive usage. When light hits a fogged lens (or one with an abundance of micro-scratches from cleaning and usage) the image that is projected onto the film will be soft in contrasts or have halos around highlights. Eveb reflected strong light also has this effect on some lenses. Therefore a lens hood is indispensible - or cloudy weather!
My lens hood was initially used on a TLR camera but fit snugly to this lens. It's not screwed on but is held in place by metal clips. 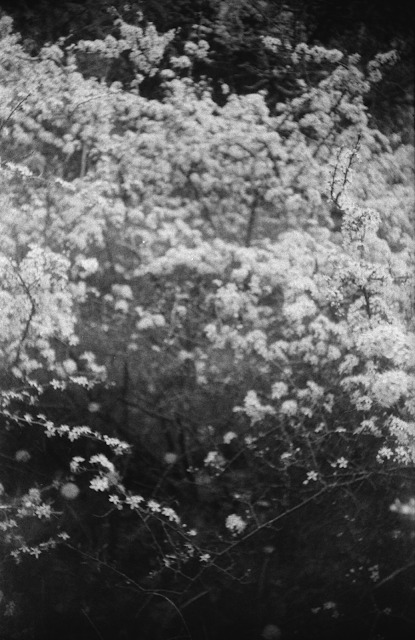 The camera with the crappy lens [sic!] is a Halina 35X. You can see some pictures from last summer here. It's the most basic camera. When you've wound the film you even have to cock the shutter. The photos it produces have a true retro look due in part to the lens' uneven focus (middle) and light vignetting (corners). I think it's perfect! For me the pictures convey a timelessness and sometimes a dreamlike quality. (I have ordered this Lomography Metropolis film which will be perfect for this camera.) 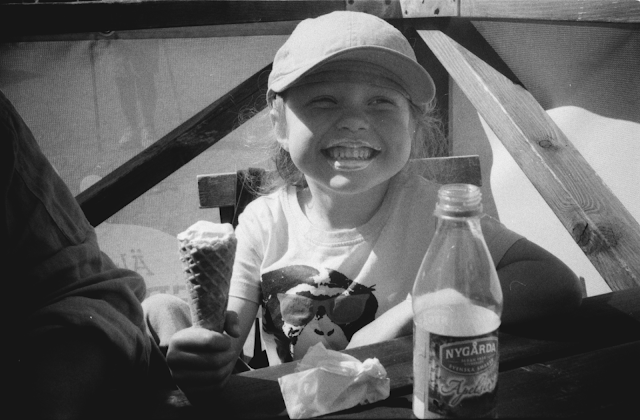 The thing on top of the camera is a rangefinder. Since the camera hasn't got one inside to keep track of the focus one can add a rangefinder. You find focus in it then transfer the information to the focus ring on the camera. Easy peasy. Rangefinders can be bought for €10 and up on auction sites. There were a lot of them produced by known and unknown (cheaper but equally good!) brands.